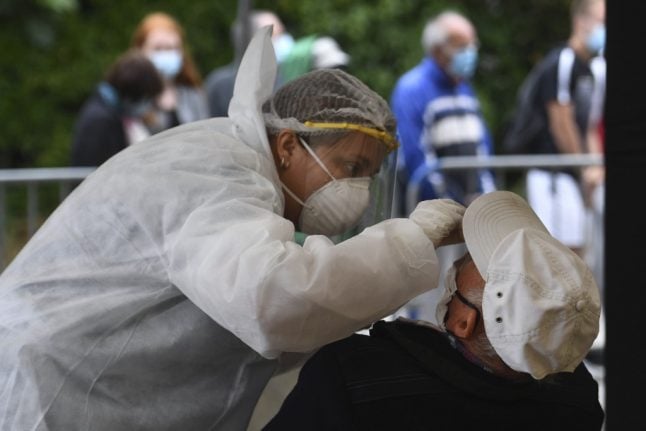 France is testing extensively to track down new transmission chains before they get out of hand. Photo: AFP

The spike in the number of new confirmed cases cannot simply be explained by the country's reinforced testing programme, and experts have pointed their fingers at young people with a lax attitude to health rules as the main problem.

“The most important vector of the disease today are young people with little or no symptoms who travel, who party,” Céléstin-Alexis Agbessi, an emergency doctor at the Parisian hospital Bichat-Claude Bernard told The Local last week.

However, only a minority of the clusters investigated by health authorities so far were found to have originated at a big social gathering.

Every week, Santé Publique France publishes a map showing the clusters still active in France. The system collecting the public data is called MONIC, which is a short for monitorage (monitoring).

Since May 9th, 531 clusters have been detected in France – not counting the country's nursing homes for elderly, Ehpad – 499 on the mainland and the rest in the overseas territories, according to the health ministry.

The map below shows where the active clusters in France are located. Around a third of the total clusters have been put under investigation by health authorities.

New information about these clusters reveal that parties and other social gatherings do not constitute the largest proportion of the current registered spread of the virus.

In fact, the top source of spread at the moment is actually the office.

Of the 147 clusters currently being investigated by French health authorities, most of them (26 percent) have been traced back to the workplace.

The French government for a long time urged people who could to keep working from home, but after the government loosened up the last lockdown restrictions at the end of June more people also went back to the office.

The government however issued office guidelines for best Covid-19 practices, asking employers to provide hand sanitising gel inside the office and require that employees wear masks in communal areas.

Not everyone can work from home and maintaining strict health rules has been more difficult in other places of work such as manufacturing. There have been some high profile outbreaks linked to abattoirs.

READ ALSO When and where is it compulsory to wear a mask in France?

2. Social gatherings
Social gatherings has been identified as the second most common source of spread. Thirteen percent of the clusters originated at a “temporary gathering,” according to French health authorities, either at a public or private event.
3. Extended family

Nearly as many clusters (12 percent of the total 147) originated within the extended family.

Experts have previously warned families about the risk of spread within families, and some of the first clusters detected in France after the end of the confinement originated in family gatherings.

ANALYSIS: Is France heading towards a second wave of coronavirus infections?

Health establishments and social establishments came at a shared fourth place, being identified as the source of 9 percent of the coronavirus clusters each.

Nursing homes for elderly, known as Ehpad in France, were not included in these numbers. French nursing homes were hard hit by the pandemic, which seeped into several institutions and has caused over 10,000 deaths since March 1st.

A majority of the people who have tested positive for the virus in France were asymptomatic.

This is a huge challenge for French health authorities because it means that people who carry the virus and can contaminate others will not necessarily have any reason to suspect that they themselves are ill.

It also should be noted that the numbers reported above only accounts for people that have gotten both tested and received their test results, which means that there can be a time lag between the actual situation and what health authorities can say with certainty.