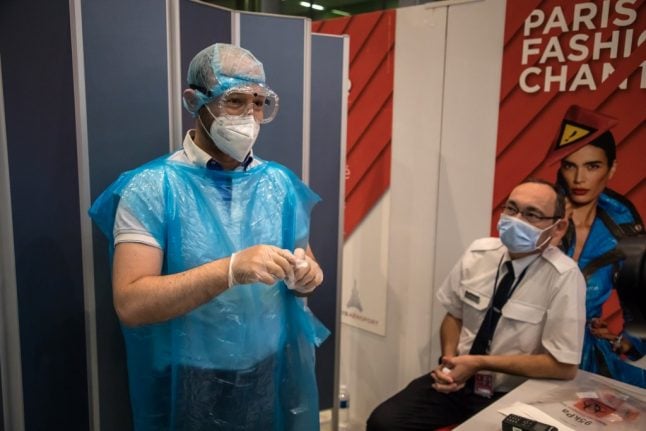 From Saturday, August 1st, France brought in tighter border controls which meant that everyone arriving from 16 'high risk' countries must be tested before being allowed into the country.

Passengers from Algeria, Brazil, India, Israel, Kuwait, Madagascar, Oman, Peru, Qatar, Serbia, South Africa and Turkey are allowed to get their test either before boarding or in the airport when they arrive.

However passengers from the USA, the United Arab Emirates, Panama or Bahrain must present a negative Covid-19 test result – taken within the previous 72 hours – at the airport when boarding and will not be allowed on the plane without one. French authorities said the first day of the new rules had gone well, but three people who arrived into Lyon airport refused to take the test. They were then issued with an arrêté préfectoral de placement en quarantaine – an order for a compulsory quarantine.

People arriving from within the EU, the UK, the Schengen zone or the 12 countries on the EU's 'safe' list are not required to take a Covid-19 test before entering the country, although there is free testing at airports which people can undertake on a voluntary basis. Results are emailed out within 48 hours.

For passengers outside those areas only essential travel is allowed.

Commenting on the first day of mandatory testing, a French government spokesman said: “Waiting times at airport screening centres were short (less than 30 minutes) at all airports and passengers followed the authorities' requirements.

“Only three passengers refused to submit to testing at Lyon Saint Exupéry airport. The authorities issued a préfectoral quarantine order against them.
“At Roissy-Charles de Gaulle and Orly airports in Paris, 2,671 passengers arrived from these 16 countries.
“All passengers over 11 years of age who did not have negative test results could be tested – this represented 556 passengers on Saturday, August 1st.
“Thanks to the mobilisation of; 80 border police officers, 5 gendarmerie technicians, 50 Paris hospitals staff and Île-de-France regional health authority teams, more than 30 volunteers from civil groups including the Red Cross, nine firefighters from the Paris fire brigade with the capacity to take samples and teams from partner medical analysis laboratories.”
The new procedure will be in place until further notice.
The government spokesman added: “If a passenger has boarded despite the absence of a negative test for travellers coming from countries where it is difficult to carry out a test (eg Algeria, Brazil, India, Israel, Kuwait, Madagascar, Oman, Peru, Qatar, Serbia, South Africa, Turkey) and who are not only in transit, the border police note the absence of this document and invite the passenger to go to the health area set up as a screening centre in order to carry out the PCR test.
“This area is managed by the teams of the Regional Health Authority.
“Once the test has been carried out, the passenger gives his or her personal details so that he or she can receive the test result and a certificate is given. They can continue their journey, in France or in transit, thanks to this traceability.
“Passengers are contacted again by the health authorities in case of a positive result and then enter the contact tracing system for a follow-up.”