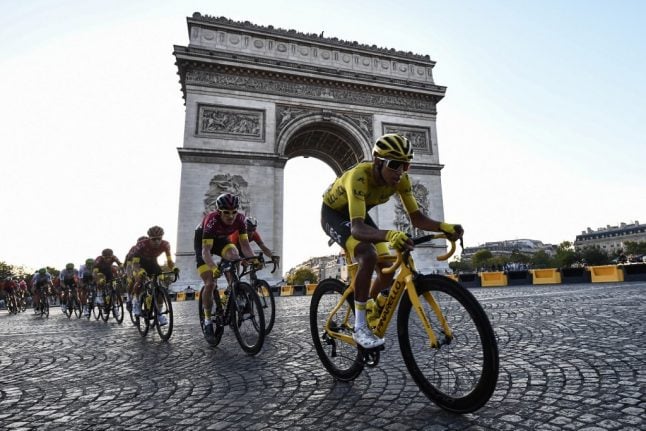 The finish line of the annual cycling event Tour de France is on the Champs Elysees avenue in Paris. All photos: AFP

Every year, the world's top cyclists gather in France to race some 3,500 kilometres across hills and mountains in what is known as “the world’s most prestigious and most difficult bicycle race”.

This year, the coronavirus pandemic long had cycling enthusiasts spooked that the massive event would be cancelled for health reasons.

While organisers got the green light to go ahead, there will be some important changes to the traditional programme.

1. It is held later than usual

Traditionally, Tour de France kicks off in July, but due to the health crisis the race was postponed to August 29th. It finishes in Paris on September 20th.

The delay was the result of a compromise between the organisers and the French government after a spat in March when Sports Minister Roxana Maracineaunu suggested that the Tour could go ahead without a public.

Organisers opposed the idea and in May they got the green light to go ahead as planned if they kept with general health rules.

READ ALSO: The vocabulary you need to understand French biking 2. There will be less people

“The party is less beautiful than we planned,” tour boss Christian Prudhomme said the day before the race was about to kick off.

Prudhomme was referring to the new rules on spacing out and limiting the number of spectators laid out earlier the same week after host city Nice and the rest of the countries saw coronavirus rates spike.

France has banned gatherings of more than 5,000 people, and organisers said they had “made the decision to let the race go ahead for nearly closed doors” in Nice and Paris, the start and end cities.

“The idea is to spread people out out along the route,” Prudhomme told France Bleu.

In the smaller towns and cities there will be fewer people in general and the crowd control will likely be easier to manage.

“During the rest (of the race) it's possible to come and watch the Tour de France pass by. However no crowding. That's just good sense,” Prudhomme said.

The tour boss had previously said that 2020 “is certainly not the best year to collect autographs” and that “there will surely be no kisses or hugs during the official ceremonies.” Tour de France is an annual highlight for both cycling enthusiasts and the French towns and cities that get to host the cyclists.

3. Spectators will be masked

Organisers decided that everyone coming to watch the race must wear a face mask on July 31st, so before spiralling coronavirus rates saw Nice and Paris introduce blanket rules on mask-wearing outside in their cities.

The rule goes for all along the race and not just in the towns and cities that have rules on mask-wearing out in public.

Tour de France's Prudhomme then said the new rule was in line with “common sense.”

“Everyone has (to wear) a mask,” Prudhomme told French media on July 31st when he made the announcement.

Sports Minister Maracineaunu told France Info that she had “insisted” that the organisers impose mask-wearing “even outside.” Organisers of this year's Tour de France did not want to see it go ahead without a physical audience, saying the spirit of the spectators was crucial for the race.

4. The race will be kept inside France

Sometimes the race dips into neighbouring countries, but this year’s Tour de France will be kept inside French territory.

Kicking off in Nice on August 29th, the cyclists will move from the south east to the south west, riding through a string of towns and cities – including Sisteron, Le Teil, Cazères, Loudenvielle, Pau and Laruns – before flying up to Ile d'Oléron, on the west coast in the middle of the country.

They then will head east, riding for hundreds of kilometres through cities like Poitiers, Chauvigny, Clermont Ferrand and Lyon, before snaking up towards the north east edge and towards finish line on the Champs-Elysées avenue in Paris.

5. The cyclists will be tested

A mobile laboratory will follow the cyclists throughout the race to test the athletes if they show any symptoms of having coronavirus. Organisers and staff will also be able to get tested at the lab.

Tour de France organisers this year dropped one of the race's most famous – although contentious – customs of having two young women accompany the winner on the post-race podium.

One woman and one man will be joining this year's winner instead, breaking with an old tradition that has been subject to mounting criticism over the past years for being outdated and sexist.

Le départ – the start of each stage

Le peloton – the group of cyclises (literally translated as 'the pack)