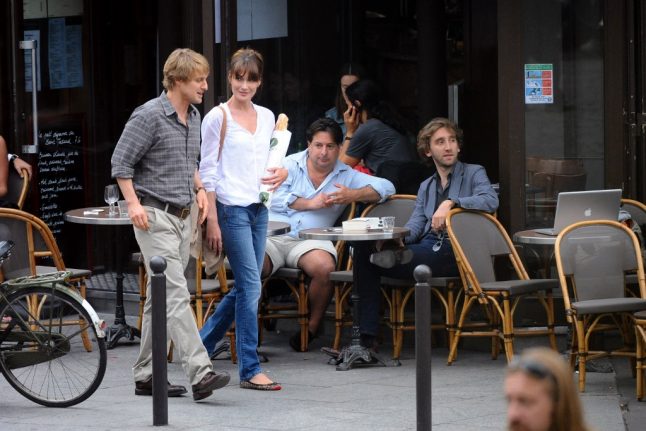 Paris is all expensive perfume, freshly-baked baguette and Hollywood actors, right? Sort of. Photo: AFP
1. Urine
Afraid so. It is an unpleasant but undeniable fact that large parts of Paris reek of urine. In enclosed places like under bridges and in alleyways – particularly in summer – the smell can be overpowering.
Not wishing to get involved in gender wars here, but this is mainly the fault of men, who seem to have little compunction about peeing in the street when caught short. Asking male Parisian friends about this provoked some feet-shuffling and muttering about cafés having too few toilets. Hmm. Freshly baked baguette is one of the greatest smells in the world, no question. Photo: AFP
2. Bread
One of the clichés that is definitely true is the delicious smell of freshly baking bread. With an estimated 30,000 boulangeries in the city you are never far away from a baguette.
While eating in the street is generally frowned upon in France, even the most hardened Parisian will sometimes make an exception for munching on the end of their still-warm baguette as they carry it home.
Walking past a fromagerie is also a delicious sensory experience.
READ ALSO: Baguettiquete – weird things the French do with bread
3. Traffic fumes
While Paris is slowly weaning itself off its addiction to the car, there are still a lot of them about and it’s undeniable that the busier streets smell of traffic fumes. City Hall is bringing in a lot of initiatives including car free Sundays, banning older diesel vehicles and encouraging cycling, so maybe this won’t be a defining smell forever, but for the moment the air quality in Paris is not the best.
In fact a 2018 study revealed that breathing the polluted air of Paris for a year is the equivalent of smoking 183 cigarettes. Which brings us of course to . . . The Paris café terrace is a popular hangout for smokers. Photo: AFP
4. Cigarette smoke
Smoking rates in France are actually declining and the country has lower rates of smoking than many other European countries. But despite that, you won’t walk far down a Paris street before you get a whiff of cigarette smoke.
Perhaps the reason that it seems more prevalent than it really is are the numerous café terraces dotted around the city, which is where the smokers congregate since the 2007 ban on smoking in the workplace. Although as vaping becomes more popular you’re also quite likely to notice the revolting sickly sweet smell of certain vape liquids.
READ ALSO MAP: Where in France people smoke the most
5. Perfume
France is of course known for its luxury perfumes and French men and women are not shy of using one of their country’s most famous exports. Particularly if you’re in the smarter central areas of Paris, your nostrils will regularly be delighted by a trail of Chanel, Yves St Laurent or Dior fragrance wafting down the street.
6. Body odour
There are some unkind souls who suggest the French only wear perfume to cover up the fact they haven’t showered. A lack of washing seems to be a prevalent myth about the French, although it’s never been corroborated by any kind of scientific measure and the vast majority are squeaky clean.
However the enclosed space of the Metro, particularly in the evening rush hour at the height of summer, does provide a few choice whiffs. But maybe don’t get too self-righteous about this as no-one is at their freshest when the temperatures in Paris hit 42.6C. On some Metro lines you will unavoidably be getting up close and personal with a stranger’s armpit. Photo: AFP
7. Metro
Speaking of the Metro, that too has its own special smell. Slightly hard to describe, but something like metal and smoke and exhaust fumes, it’s very particular to Paris.
Might not sound too appealing, but if it’s a sign that you’re on your way home after a long hard day then it can provoke some relaxed feelings.
READ ALSO The strange rules of the Paris Metro that you need to know
8. Cannabis
And speaking of relaxing, many people in Paris apparently choose to do so with a little herbal help.
Despite some experiments on medical use, the recreational use of cannabis is illegal in France, which often comes as a surprise to people who have sniffed the air of Paris. Still, get caught smoking it and you can face a fine and the possibility of a jail term depending on the circumstances. Don’t say you weren’t warned. Getting hungry just looking at this . . . Photo: AFP
9. Chicken
Got the munchies? You will never be short of chicken in Paris and the smell of a roasting rotisserie bird is one of the joys of the city. Many butchers, supermarkets and market stalls have racks of ready-roasted birds being slowly basted in their own juices, sending out delicious aromas.
In fact markets in general are good for nice smells. Often thought of as a small-town or rural thing, Paris in fact has hundreds of markets, from the smaller neighbourhood or suburban markets to the big ones at Bastille or Belleville, they provide delicious whiffs of cheese, olives, sausage and freshly cooked delicacies.
READ ALSO All you need to know about shopping at French food markets
10. Sewage
Sorry to end on a downer, but unfortunately the sudden waft of sewage smell from an underground drain is a regular occurrence in Paris, particularly when it rains.
Still, you can always buy a baguette to cheer yourself up.