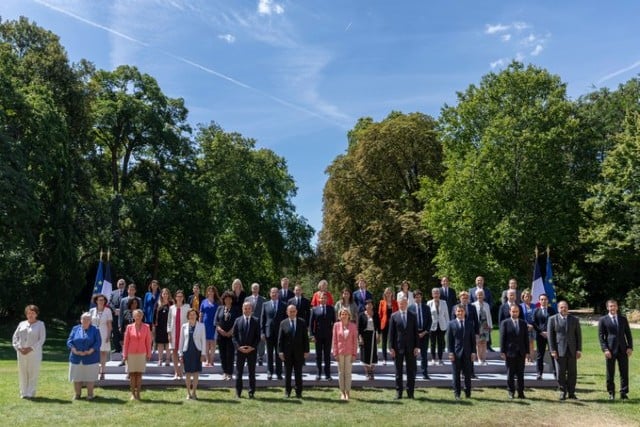 Rather than the traditional shoulder-to-shoulder group shot, the portrait is taken from afar to fit President Emmanuel Macron's new 43-member team into the frame on the Elysée Palace's lawn.

The new government was thrashed out earlier this month in a reshuffle seen by analysts as a bid by Macron to improve his reelection chances in 2022.

“The French expect concrete results from us. This is what we are committed to! Let us continue change to build a better economic, social, environmental and cultural future,” Macron tweeted with the new portrait.

So who are they?

1. There are 30 ministers in the government, plus 12 junior ministers. With newly appointed prime minister Jean Castex and Macron himself that makes 44 people in the country's top team.

2. It's the largest government France has had since 2004, with an increase of six ministers from the previous government lead by Edouard Philippe.

3. It's pretty nearly gender balanced with 20 women and 22 men, although a number of the most prominent roles remain in male hands including Jean-Yves Le Drian as foreign minister, Jean-Michel Blanquer in education, Olivier Véran in health, Bruno Le Maire in finance and the prime minister Jean Castex.

4. Probably the most controversial appointment is Gérald Darmanin. The former junior finance minister has been promoted to interior minister, making him nominal head of the French police. That's the same French police who may well end up investigating him over a rape allegation from 2006 which the appeal court has ordered reopened.

5. It has taken three weeks to select the entire group, with the names of the junior ministers released on Sunday night after Castex was appointed by Macron on July 3rd.