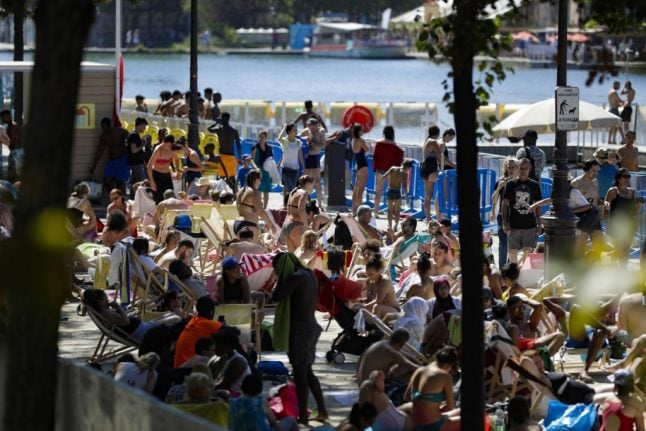 France has seen a spike in the number of new coronavirus cases. Is complacency at fault? Photo: AFP

This weekend, French Health Minister Olivier Véran warned the French that while “currently we are not seeing a second wave” of coronavirus cases, the numbers pointed in a worrying direction.

“Over the past few days we have seen the number of positive cases rise sharply after it fell for 13 weeks,” Véran told the French daily Le Parisien this weekend.

France has massively ramped up national testing capacities since the pandemic hit the country with full force in March, but health authorities say the recent surge in confirmed coronavirus cases did not just reflect its increased capacity to count the number of infected people.

Céléstin-Alexis Agbessi, an emergency doctor at the Parisian hospital Bichat-Claude Bernard which receives coronavirus patients from the greater Paris region, was unequivocal: France was experiencing “a slow resurgence of the virus,” he told The Local.

At the height of the pandemic this spring, Agbessi and his colleagues turned the hospital on its head to deal with the surge in number of new Covid-19 patients. The teams worked around the clock to transform every part of the building into intensive care units ready to receive new patients. Everything was turned upside down, and surgeons who found themselves without operations helped the nurses with their work.

That was only a few months ago, and the memory was fresh in Agbessi's mind. But the doctor worried that most people in France by now had forgotten how badly the coronavirus hit the country the first time around.

“The psychology of the French is changing,” he said.

In March, to ease the mounting pressure on hospitals, the French government enforced two months of strict, nationwide lockdown, confining everyone to their homes and restricting all outdoor activities to 'essential trips' like grocery shopping or walking the dog.

For several weeks after the confinement ended, observers of the pandemic and authorities alike held their breath as they waited for a resurgence in cases as people began socialising again.
Now, more than two months since the lockdown ended, the French have been going back to a more normal lifestyle, although there still are health rules to follow such as wearing masks inside in public spaces with hefty fines for those who don't.

But the French “joie de vivre,” Agbessi said, was incompatible with the “new normal” imposed by the coronavirus.

“Unfortunately, we aren't in a normal world anymore, we are in a world that is dictated by the coronavirus,” he said. Last week, France's daily reporting of new coronavirus cases jumped past 1,000, a number experts say is too high – even with the increased testing of the population.

“It should be half, around 500,” Agbessi said, pointing to the country's younger population as at source of the problem.

“The most important vector of the disease today are young people with little or no symptoms who travel, who party,” he said.

Last week, a video from a bar in St Tropez showing a big group of young, unmasked holidaymakers dancing around a pool caused outrage on social media.

The video went viral and caused a series of outcries over what seemed to be a complacency among the country’s youngest – those least likely to be severely hit by the virus.

“They are putting their parents and grandparents at risk, that's what's so devastating,” Agbessi said.

In the public health agency's latest coronavirus report it noted that the new numbers showed an increase in the number of elderly among the new infected, confirming that the virus seemed to be spreading between generations.

“These results call for the greatest vigilance since it is in this population that the greatest numbers of deaths due to SARS-CoV-2 occur,” Santé Publique France wrote.

Over the weekend Health Minister Véran pleaded with French youth to “be more careful.”

“I am calling on young people to be vigilant,” he told Le Parisien.

Many of the recent clusters are reported in 'hotspots' including south west France, Brittany and Mayenne in the north west, and local authorities have raised concerns about spikes in cases in their areas.

So far, seven of France’s 101 départements have been qualified by Santé Publique France as being in a ‘'vulnerable' situation – Mayenne and the overseas French territories of French Guiana and Mayotte at an elevated level and Gironde, Nord, Val d'Oise and Vosges at a moderate level – due to the number of new cases recorded.
MAP Which areas of France are 'of concern' as Covid-19 cases rise?
The map below show the areas identified as “vulnerable.” Source: Santé Publique France
The “R” (reproduction) rate that indicates the level at which the virus is spreading is currently at 1.3 on a nationwide basis, meaning that every 10 people with the virus will infect 13 others on average.

However the rate varies across the country and some areas have reported a higher local R rate than the national rate.

Brittany reported an increase of the R rate to 2.6 between July 17th and 20th, leading to local authorities in one resort on Monday announcing the closing down of beaches, parks and bars at nighttime.

'The virus is spreading'

Pascal Crépey, an epidemiologist and professor at the Rennes School of Higher Public Health Studies (EHESP), told The Local that it was important to be careful when interpreting the R rate because it was volatile to small changes.

“The key message that we should retain regarding the R is that it is higher than 1, which means that the virus is spreading,” he said.

But while the R rate and contamination rates have risen, the national death rate and the intensive care admissions rate – both key to monitor the development of the virus – have not seen a significant rise.

If the general increase in the number of cases are mostly are people with no or little symptoms, is it so bad if the cases are increasing?

Crépey cautioned against a too optimistic analysis, noting the delay between a rise in cases and hospital admissions and deaths.

“Everything doesn’t peak at the same time,” he said pointing to the sometimes two weeks-long gap between the time of infection and the first symptoms, accompanied by an equally long lag from when someone shows the first symptoms to then – potentially – falls critically ill.

ANALYSIS: What next for the French regions facing a possible second wave?

“If there is a peak in infections now we won’t see it [the impact the hospital rates] before at least a fortnight,” he said.

Crépey said that if France managed to maintain its R rate at around 1.1-1.2, “we may be able to deal with the epidemic without our intensive care units being overwhelmed.”

“But the more the virus circulates the more likely we will be facing a super spreading event,” he said, referring to a religious gathering in Mulhouse, north of France, that has been outlined as one source of big spread in the beginning of the first wave in March.

“If at one point we get several hundreds or thousands infected at a same time, like in Mulhouse, the contact tracing system will be overwhelmed and there will be no way of slowing down the circulation without a lockdown,” the virologist said, adding: “But it won’t be a lockdown to save the ICU capacity but to stop the circulation, it would be a localised lockdown like the ones we saw in Germany and Spain.”

READ ALSO No return to lockdown in France, even if there is a second wave

'Depends on how we behave'

Daniel Camus, a virologist at the Pasteur Institute in Lille, said the only way to avoid a second wave was to comply with rigorous health routines and social distancing measures.

“The only way to protect ourselves from the virus is to avoid it,” he told The Local.

“That means wearing a mask, keeping a distance, and just comply with general health rules.”:

“It sounds ridiculous because we keep repeating it, but everything depends on how we behave,” he said.