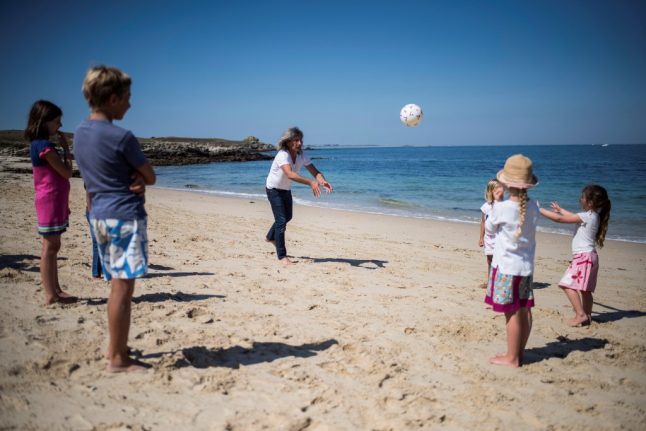 Brittany is one of several areas of France that have seen a spike in cases in recent days, leading to concern from local authorities and health chiefs.

As well as putting in extra testing facilities, local authorities have now announced a crackdown on beaches and bars.

In the town of Quiberon in the Morbihan département the mairie announced on Sunday that all beaches and parks would close between 9pm and 7am every day, effective immediately.

“What we are seeing is that all the positive cases in the commune are young people between 18 and 25,” Gildas Quendo, Quiberon's first deputy mayor, told France Info.
“They are linked to groups of more than ten people who meet late at night on the Grande Plage. We are forced to prohibit these groups.”
The Préfet of Morbihan had also raised concerns about the behaviour of young people and said he was considering banning groups of more than 10 people and forcing the town's bars to close at 7pm each night.
One bar in the town has already been closed down after it was found to be at the centre of a 'cluster' of cases, containing both holidaymakers and locals.
Préfet Patrice Faure said: “The infection figures are increasing in Quiberon. We did a little over 230 tests yesterday, we'll have the results between tonight and tomorrow. Depending on this, I will take other measures.”
He added that the area had been overwhelmed by gatherings of “young people who are on holiday or live here, unaware of the danger of contracting and spreading the virus.
“We have massively reinforced the gendarmerie teams on the ground,” he said, adding: “Every minute that goes by, my determination to be extremely firm grows.”
Between July 17th and 20th, 143 new cases were detected in Brittany and the R rate rose to 2.6 – meaning that every infected person was infecting more than 2 others.
MAP Which areas of France are 'of concern' as Covid-19 cases rise?
Brittany had escaped reasonably unscathed during the height of the epidemic, but since lockdown was lifted cases have grown.
The area is a popular one for holidaymakers, both French and international tourists, but authorities said the majority of the clusters of cases are linked to family gatherings or workplaces, rather than tourism.