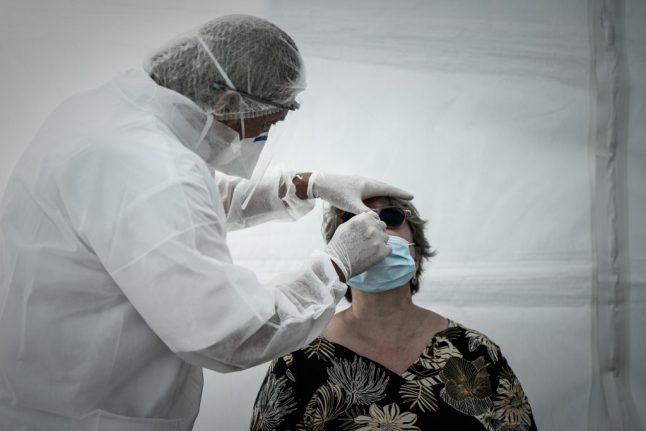 AFP
All PCR tests, which determine if a patient is infected with Covid-19, will now be fully reimbursed in France.
Health Minister Olivier Véran said the move would allow members of the public to get to be reimbursed for the cost of a test even if they had no symptoms or a prescription from the doctor.
Up until now the there have been three main paths to testing in France – through a prescription from your doctor, through the track and trace programme or at a walk-in centre.
People who have organised their own tests have not been covered for the cost but that will change now.
READ ALSO: Where and how to get a Covid-19 test in France?
France is trying to step up the number of tests carried out in a bid to help tackle a recent increase in the number of coronavirus cases in the country.
In recent days the number of daily cases has topped 1,000 with health chiefs imploring the public to reimpose a “collective discipline”.
“We cannot speak of a second wave but one thing for certain is that we have seen the number of positive cases rising sharply in recent days, whereas it had been declining for thirteen weeks,” Véran told Le Parisien newspaper.
“We have greatly increased the number of tests carried out. After May 11th, we were doing a little more than 200,000 per week, now I can tell you that we are approaching 500,000 tests per week, with a positive rate of around 1 to 1.5%,” the minister added.
The “R” number that determines if the virus is spreading has risen to 1.3 meanwhile, meaning that every ten people with the virus will infect 13 others.

The DGS said on Friday it was encouraging French people to work from home if they could and reduce needless contact with others.

Health chiefs also said that members of the public should get tested if they were in any doubt they had the virus.

Automatic isolation is essential for anyone who has symptoms or who comes into contact with anyone who has tested positive or is ill, in order to limit the spread of the virus, the DGS warned.