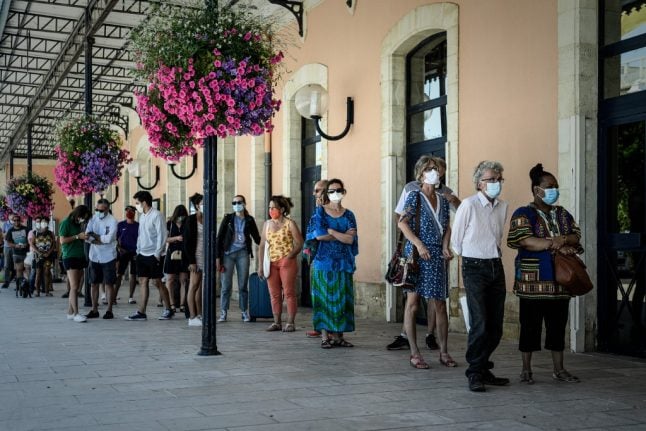 The virus has begun to spread again in France after the relaxation of lockdown measures and as people take fewer precautions.

The number of new cases in France began to climb again, to more than 1,000 a day, according to the health ministry's DGS health directorate.

On Friday some 1,130 new cases were detected according to the DGS.

“We have returned to levels comparable with those at the end of the lockdown period,” a DGS statement said.

The French health directorate sounded the alarm tonight after a worrying spike in Covid-19 cases. There were 1,130 new cases in 24 hours, after over 1,000 on Wed-Thurs and almost 1,000 Tues-Wed. The daily average has been creeping up but was around 500 until a week ago. 1/5

“We have thus erased a good part of the progress made during the initial weeks” since the lockdown was lifted, it added.

“It's more essential than ever to reimpose our collective discipline,” the DGS warned.

French officials reported Friday that 30,192 people had died of COVID-19 to date, one of the highest numbers in Europe.

The “R” number that determines if the virus is spreading has risen to 1.3 meanwhile, meaning that every ten people with the virus will infect 13 others. The DGS said on Friday it was encouraging French people to work from home if they could and reduce needless contact with others.

Health chiefs also said that members of the public should get tested if they were in any doubt they had the virus.

Automatic isolation is essential for anyone who has symptoms or who comes into contact with anyone who has tested positive or is ill, in order to limit the spread of the virus, the DGS warned.

France has also decided to test travellers from countries where the virus is particularly virulent.

Along with the United States and Brazil, which are reporting tens of thousands of new cases each day, the countries include Algeria, Bahrain, Israel, India, South Africa, Kuwait, Qatar, the United Arab Emirates, Oman,
Panama, Peru, Serbia, Turkey and Madagascar.

Coronavirus tests will be rolled out across France by August 1, and will also be carried out at French ports, Castex said.

He also said that while France's border with Spain would remain open for now despite a surge in cases in Catalonia, “we strongly urge French people to avoid going there until the health situation improves.”

As for people travelling to France from Spain, “we are in talks with the Spanish and Catalan authorities so that… they try to limit the flow as much as possible,” he said.