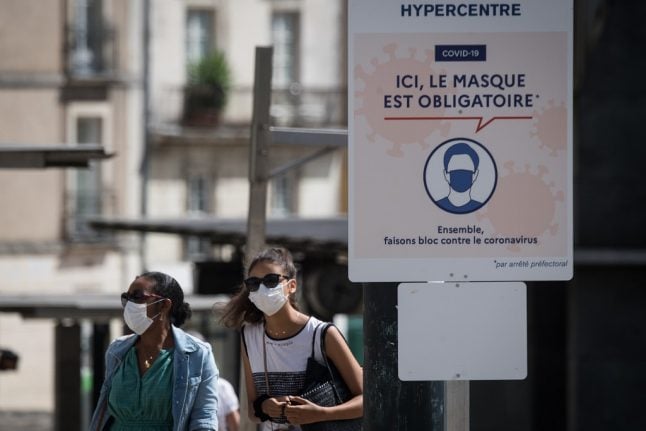 Several French cities have announced that they will be following Paris and Marseille in making masks compulsory in all outdoor public spaces.

The French government rule only makes masks compulsory in enclosed public areas – at risk of a €135 fine – but local authorities have the power to go further and many have chosen to use it.

Health minister Olivier Véran has urged people to wear masks “if you're in the street full of people, and not sure about being able to keep a safe distance.”

The first city to make the move was Toulouse, closely followed by Nice and Marseille.

Paris authorities later that week announced that masks would be compulsory in outdoor public spaces in the city and its three surrounding départements – Seine-Saint-Denis, Hauts-de-Seine and Val-de-Marne.

Over the weekend Bordeaux, Orléans and Strasbourg also brought in the 'masks everywhere' rule.

In Strasbourg the rule affects Strasbourg itself, Schiltigheim, Illkirch-Graffenstaden, Lingolsheim, Bischheim, Ostwald and Hoenheim, but also six other communes of more than 10,000 inhabitants in the départment: Haguenau, Sélestat, Bischwiller, Obernai, Saverne, Erstein.

Many other smaller towns and communes have brought in mask rules, while other towns have only made masks compulsory in certain areas, such as crowded tourist areas or outdoor markets.

Here is a selection of the smaller towns. La Rochelle is one of several towns making masks compulsory in some outdoor places. Photo: AFP

Which towns have brought in outdoor mask-wearing rules?

In Brittany, the measures are widespread. Local authorities in Finistère département have made it compulsory to wear masks in the outdoor markets of 31 communes including the port city of Brest.

In the popular tourist destination of Saint-Malo, the mayor has made masks compulsory in the walled 'old town' area. Mayor Gilles Lurton explains that the old town attracts “permanent residents, secondary residents, day-trippers and resort tourists, thereby increasing the number of visitors to the old town.”

In the town of Locronan, the rule applies to all streets.

Just to the east, in Brittany's Côtes-d’Armor département, mask-wearing in outdoor markets is mandatory in nearly 70 communes including the picturesque tourist hotpot of Dinan.

In Lille local authorities made masks compulsory in all pedestrianised areas of the town, including parks and gardens.

In La Rochelle, on France's western coast, every person older than 11 must now wear a mask in the Old Port area as well as the streets and markets of the town's central zone.

In Cannes masks are required at outdoor markets.

In Argelès-sur-mer, also on the south coast, masks are now compulsory in the central beach area and in outdoor markets, with a possible €38 fine. In nearby Canet-en-Roussillon the rule applies only to markets.

Meanwhile, the towns of Grau-du-Roi and Mandelieu-la-Napoule have made masks compulsory on all streets in the town centres, with a €38 and  €35 fine respectively.

This just a selection and there are more than 400 communes in France that have brought in some kind of regulations, and the list is growing every day.

A full map of the towns affected can be found here.