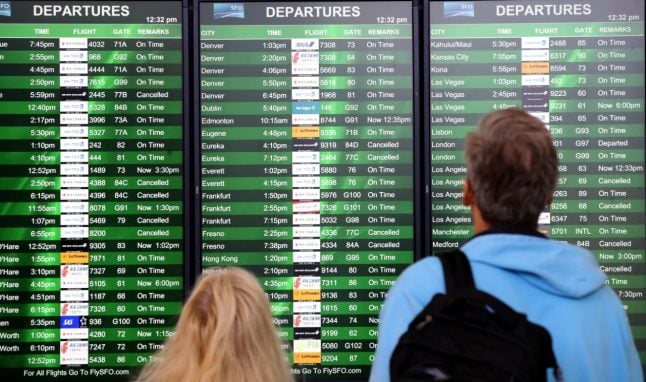 Travel restrictions on US arrivals are still in effect in Europe. Photo: AFP

In total 4.8 million Americans came to France in 2019, making it the second most popular destination for US tourists in the world (just behind Italy).

But there are also an estimated 100,000 Americans living here, people now separated from loved ones, or in some cases prevented from returning to the country they call home. Others have had to put their new lives in France on hold.

LATEST When will Americans be able to travel to France again?

'I haven't seen my boyfriend since February'

Missing loved ones has taken its toll on many people, from partners to parents or grown-up chidlren.

Kelly Smith said: “My boyfriend lives in France and I split my time between New York City and Paris so we can be together.

“We were supposed to be together all of April and most of June. Clearly that didn’t happen. We haven’t seen each other since February.

“I hope to attend the American University in Paris in the fall (something I’ve been wanting to do for a few years now but have been putting off). My visa appointment is in August but I’ve been hearing about people’s appointments getting cancelled.

Americans who have already put down roots in France have also found themselves cut off.

Jim Lockard and his wife live in Lyon.

“Our daughters were both supposed to visit during what became confinement.” he said.

“They live back in the US and the trip has had to be put off indefinitely.”

For many their long-awaited dream of coming to France has had to be put on hold.

Tessa Comfort was due come to France and work as an au pair.

“Because of the travel ban, I am not allowed to get a visa appointment.” she said. “I'm just waiting in limbo right now. I have not abandoned plans yet, I am just hoping for a miracle.”

It's a common theme.

Hannah Marley from Atlanta was planning on coming to France to teach English.

“Due to the pandemic, France is not issuing work visas until further notice, meaning I can't make an appointment or submit my application.” she said.

“I am trying to find a way to come, but every day there seem to be more obstacles. There's a lot of inconsistent information about what's required.” US tourists are all but absent from the streets of the French capital. Photo: AFP

Frank Rachubinski had begun construction of a home here last September after retiring.

“The home is now complete but we're unable to get there.” he told us.

“We sold our condo here in the US and are currently living from place to place until we can get entry with a visa.”

“This is frustrating for us as well as for the French contractor and companies supplying items for the house like furniture.”

“What was to be a beautiful transition is becoming a mentally draining experience.”

Donna Jones purchased a timeshare in a Paris apartment in January.

“My first two-week periods were in May and October. My May flight was cancelled and I doubt I can visit in October either, so I'll go the whole year without ever getting to stay in the apartment I dreamt of for so long.” she said.

“My next opportunity is in February 2021, but I'm not optimistic about that.”

It's a similar story for Bob and Debbie Friday.

“We took a 1-year lease on an apartment in Paris last September, and planned to come and stay in March, but the pandemic changed all of that” they told us.

“By June we realised we would not be able to come back this year and reluctantly cancelled the rest of our lease.”

“We had planned to make France our second home. Now who knows when we will be able to resume our French residency?”

'Of course we should not be allowed into Europe'

Many readers expressed anger over the US government's handling of the pandemic which, in their view, is to blame for Europe's continued imposition of travel restrictions.

JoAnn Lucas had planned to attend two weddings in France this summer, but both flights were inevitably cancelled.

“I had plane tickets and apartments rented. Never could I imagine we would be such a disaster here in the US that I'm going to miss both weddings.” she said.

“The US is such a disgrace right now – of course we should not be allowed into Europe.”

Candice Elliott, who was forced to cancel a trip to Paris with her friend, shared those sentiments.

“Europe is not allowing in American plague rats and we don't blame you,” she said.

“I can't imagine we will be able to come in 2020 and I'm so sad about missing the new exhibit at the Atelier des Lumières. I've been before and it's such an amazing experience, so I'm really disappointed.”

Julia Mitchell Gray had planned to visit with her husband at Christmas.

“While our trip may still be possible theoretically, we are watching as more and more of our friends' travel plans are cancelled due to EU travel restrictions,” she said.

“We are not optimistic as Covid-19 is expected to worsen in the US in the coming months. I feel hopeless and infuriated by the lack of leadership.”

It's more than just practical problems that have been thrown up, the pandemic has robbed many people of precious, life-changing moments they might have otherwise experienced.

When Mary Lisa Ford found out her painting 'Curtain Call' had been accepted by the prestigious Salon d'Automne, where works by the likes of Cézanne, Matisse and Gaugin have hung in years gone by, she was thrilled.

Flying from Philadelphia to Paris to see her work exhibited in the Grand Palais would be the fulfilment of a lifelong ambition. The stunning depiction of the Ballet de l'Opéra de Paris, inspired by the artist's disappointment at not being able to attend the ballet in 2019 due to transportation strikes, “now has a deeper emotional meaning because I might not be able to attend the exhibition itself,” she pointed out.

“As I don’t know when I will be able to return to France, it is an indefinite final bow for me.”

She's not given up on the dream just yet though.

“I have booked an Airbnb for October with high hopes that things may change by then,” she told us.

The unprecedented crisis we're living through has meant certain pledges have gone unfulfilled.

70-year-old Alan Pendleton, for instance, had made his mother a promise.

Ever since his childhood, the family had travelled to Paris once a year; a passion so ingrained that his mother considered herself to have been “born Parisian in another life”. As she lay dying at the age of 92 in January 2019, Alan vowed to continue the tradition for the rest of his own life. His last words to her were “Nous aurons toujours Paris, maman.”

Once asked why she loved the city so much, his mother, a lady of “sturdy, midwestern stock”, had replied simply that “being in Paris makes me brave and a little invincible”.

“I never pressed for a fuller explanation.” says Alan.

“Because of Covid, I was obliged to break my vow to her. But, at the first opportunity, my wife and I will carry her ashes and slip them silently into the Seine with the words, 'Nous aurons toujours Paris, maman'”.

Thank you to all The Local's readers who shared their stories, we got hundreds of responses and were unable to include them all but we hope this is a representative selection.