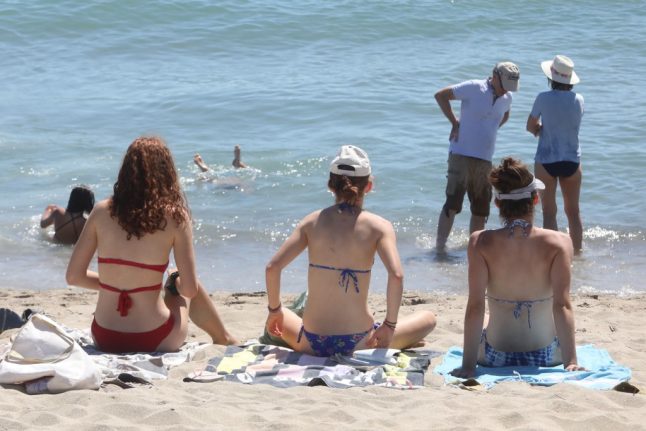 As the summer holidays begin, you will probably already have been bombarded with special offers from holiday and transport firms desperate to tempt you to a French holiday. But Covid-19 has not gone away in France, so what are the things you need to consider before booking that holiday?

If you're already in France then there are now no restrictions on moving around within the country, but if you're travelling from abroad you need to check the international situation.

Travellers from the UK also need to bear in mind the possibility that the British government will introduce a sudden quarantine, as it did with Spain.

READ ALSO LATEST: Could UK travellers from France be the next to face quarantine?

If you're travelling from outside Europe you need to check whether your country is on the EU's 'safe' list – if it isn't then you can only travel to France if you have an essential reason for travel. Arrivals from 16 countries face a compulsory Covid-19 test before they will be allowed into the country. France has reopened its borders to most travellers. Photo: AFP

Although death rates have thankfully fallen dramatically in France since the peak in March the virus has not gone away and in recent days several local authorities have raised concerns about spikes in cases in their areas.

IN NUMBERS How worried should we be about Covid-19 spikes in France?

Comparing current virus levels with those in March or April is difficult because France has hugely increased its testing programme since then, so many of the more mild or asymptomatic cases of Covid-19 are now being located.

There are currently 5,720 Covid-19 patients in hospital, of whom 410 are in intensive care. The hospital death toll for the last 24 hours was 13 people.

Six départements are currently listed are being in a 'vulnerable' situation – Mayenne and the overseas French territories of French Guiana and Mayotte at an elevated level and Finistère, Gironde and Vosges at a moderate level – due to the number of new cases recorded.

Several areas have also seen in increase in the R rate of transmissions, although experts caution that R rates can be misleading when dealing with low numbers.

MAP Which areas of France are 'of concern' to health authorities?

To put this in context, areas that are designated as vulnerable are those where there have been more than 50 new cases per 100,000 inhabitants (or 0.05 percent) in the last seven days.

Across the whole of France there are around 1,000 new cases confirmed every 24 hours (out of a population of roughly 66 million). Since the start of the outbreak there have been 180,528 confirmed cases in France, which is still less than one percent of the population. Masks are compulsory in many places. Photo: AFP

France had one of the strictest lockdowns in Europe, with people confined to their homes for two months and only allowed out for essential trips, on pain of hefty fines.

There is talk of reimposing lockdown if cases spike again, so if you come will you end up trapped here?

Well firstly the French government is not talking about reimposing the nationwide lockdown, but there is a possibility of local lockdowns in areas that have high virus levels.

Exactly what they will involve is not yet clear but when the nationwide lockdown was imposed people who were on holiday here were given the option to go home and travel was permitted for non-residents of France who were returning to their home countries.

At present almost all businesses are open and in most places life is fairly normal, although there are some rules that you need to follow (see below).

The EU's list of 'safe' countries is reviewed every two weeks and countries can be removed as well as added – both Serbia and Montenegro have both been removed from the first version of the list. However if you are already here you will be allowed to go home even if your country is taken off the list.

Travel within Europe is for the moment open.

However if you are travelling from the UK you may need to consider quarantines. The UK announced suddenly on July 25th that all arrivals from Spain would be quarantined for two weeks when arriving home – including people who were already there on holiday. The British government says it cannot rule out putting in quarantines for other countries at short notice.

If a quarantine is announced before you travel you cannot count on being able to get a refund on your trip, although many operators, including Eurostar, are currently offering free alterations of booked travel so you could at least postpone your trip if necessary. If any government officially advises its citizens against visiting France you should be aware that if you decide to come anyway your travel insurance will almost certainly be invalid.

Once you're in France you will of course have to follow the country's health rules and you may find them stricter than your home country's.

You can find a full breakdown of the rules HERE but the main one is that masks are compulsory on all types of public transport and in all enclosed public spaces – and you risk a €135 fine if you flout the rules.

You will also see a lot of hand gel dispensers and many tourist sites will require you to disinfect your hands before going in. You will also find that some outdoor sites such as the Eiffel Tower require masks.

Some businesses and tourist sites have introduced extra Covid-related regulations such as advance ticketing only, revised queuing protocol or a limit on visitor numbers so if you are planning a visit to a tourist site, check its website in advance.

Some local authorities have also introduced extra measures such as compulsory masks on the street and closures of beaches and bars.

What to do if you get it

In most areas virus rates are still low, but if you do develop symptoms while you're here you should of course get tested – here is how to go about that.