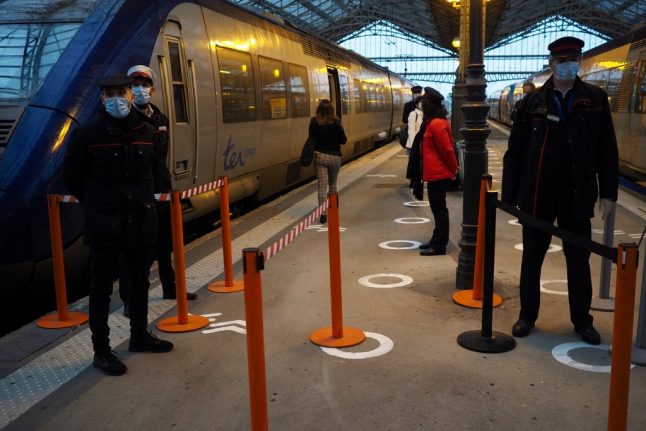 Over the summer, SNCF is to test a programme of voluntary temperature tests for TGV passengers before they board trains, beginning on Tuesday at Gare de Lyon in Paris.

'Health kiosks' will be set up on the platforms and offer temperature screening via a thermal camera.

The testing is voluntary, each test takes four seconds and passenger data will not be stored.

The rail operator said one of the main purposes of the trial was to assess the practicalities of screening passengers before travel.

An SNCF spokesman said the idea was to “check under real conditions the fluidity of boarding a TGV Inoui train if a temperature control system is installed”.

If a patient records a temperature of above 38.5C, SNCF will be notified and will offer the passenger a new surgical mask, hand gel and a reminder about barrier gestures.

If the passenger wants, they can cancel or postpone their trip free of charge, but the company said they would not be banned from travelling.

At present the system is just a trial running in a few selected stations, and SNCF says its purpose is to allow them to be prepared if such controls become necessary in the future, particularly if the feared 'second wave' arrives in the autumn.

“The aim is to prepare in case such controls are requested by the government in the event of a second wave of the Covid-19 epidemic,” said Alain Krakovitch, Director of Voyages SNCF.

“It would be incomprehensible if we were not prepared in case of a new crisis.”

Passengers arriving at some French airports, including Charles de Gaulle, are also offered temperature checks and Covid-19 testing on a voluntary basis.

Face masks are compulsory on all French public transport services and in any enclosed public space, at risk of a €135 fine.

READ ALSO When and where do you need to wear a face mask in France?