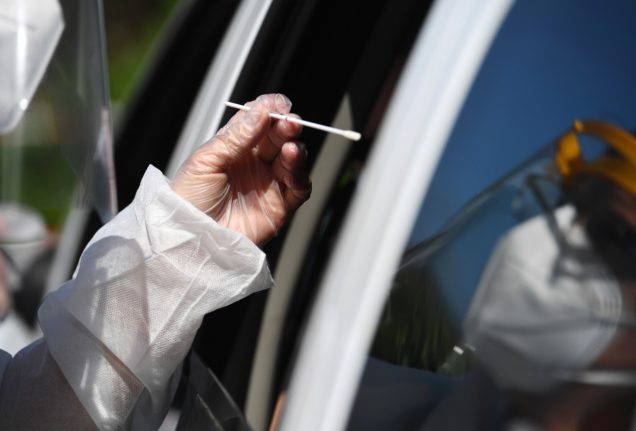 Coronavirus screening is being ramped up in Brittany. Photo: AFP

Reservist medical staff and emergency workers are set to be deployed in the Finistère département of Brittany, home to the port city of Brest, a popular destination for tourists.

While authorities were keen to stress there was no cause for alarm, they  said 39 “situations” were being monitored and urged people to continue to take precautions.

Brittany escaped comparatively lightly during the peak of the pandemic in France, but now authorities worry about summer holiday tourists coming to an area with a growing number of cases. Brittany has long been a popular destination for British tourists, as well as French staycationers.

“Our worry is what's going on in the private sphere.” said Pascal Lelarge, the official in charge of Finistère, in a press conference Monday.

“Barrier gestures fall away when you're with family and friends,” the Préfet added.

The wider Brittany region has seen its R rate rise to 2.6, meaning that a Covid-19 carrier infects an average of 2.6 others. That compares to 1.18 for the mainland France as a whole, but overall the numbers remain small, which can distort the R rate.

Between July 17th and 20th, 143 new cases were detected in Brittany.

IN NUMBERS: How worried should we be about the increase in Covid-19 cases in France? The port city of Brest, and its castle, normally welcome an influx of visitors over summer. Photo: AFP

Tourists not to blame

With the summer season now in full swing, Lelarge also sought to dispel the idea that tourists were to blame for the new flurry of cases.

“The theory that new cases are being 'imported' by visitors, relayed on social media, seems very unlikely,” he said. “The majority of cases are coming from family or workplace gatherings.”

The wider picture in France

Finistère is currently one of six French départements classed by the government as being in a 'vulnerabe situation'. The others are Mayenne in the northwest, Gironde in southwest, Vosges in the east and the overseas départements of Mayotte and French Guiana.

There are currently 114 coronavirus clusters in France, an increase of eight in the last 24 hours.

In total France has had 177,338 confirmed cases since February, of which 584 have been confirmed in the last 24 hours.

The government made lifting the lockdown conditional on there being no more than 3,000 new cases a day, so the daily figures are still well below that limit.

However the French prime minister is working on a plan to reimpose local lockdowns if cases spike too high in a particular area.