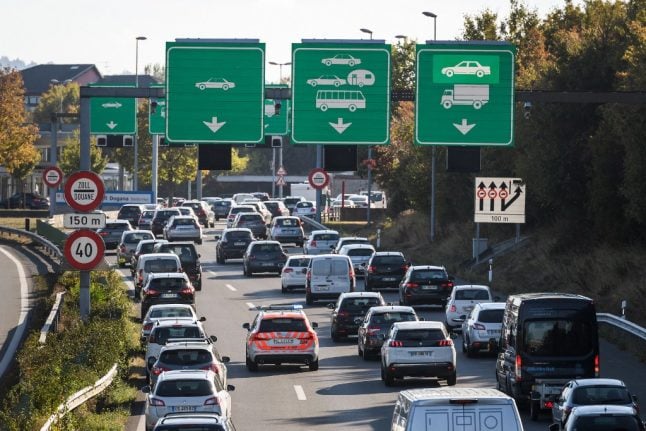 Cross-borders will have to commute to their Swiss workplace. Photo by Fabrice Coffrini /AFP

Cross-border employees from France will be allowed to work at home a maximum of 25 percent of their usual work schedule.

If they work more than that after September 1st, they would have to pay their taxes in France rather than in Switzerland.

According to RTS broadcaster, this ruling is based on the recent agreement between European states concerning payroll taxes.

But if they work more than 25 percent of time at home in France, they and their Swiss employers have to pay these charges in France, which would be much higher.

According to Véronique Kämpfen, Director of Communication for the federation of French-speaking companies, “in Switzerland, the employer and employee each contribute around 6 percent of the salary”, she told RTS television.

In France, “the system is extremely complex. The employer can pay charges of up to 40 percent, and the employee up to 12 or even 15 percent”, she added.

During the coronavirus health crisis, this regulation was suspended to allow cross-border employees, like their Swiss counterparts, to work from home without having to change their tax status.

However the rule will be reinstated from September.

“However, if there is a second wave, we will have to re-discuss this matter with the neighbouring states”, Stephan Cueni, vice-director of the Federal Office of Social Insurance, told RTS.

German citizens working in Switzerland have a longer deadline: they can work from home until December 31st without impacting their tax or social security payments.

No decision has yet been released concerning Italian workers.

About 85,000 workers commute to their jobs in Geneva each day from the nearby French regions of Haute-Savoie and Ain.

More than 67,000 Italian cross-border workers are employed in Ticino, and over 33,000 Germans work in Switzerland.

Cross-border commuters can be employed in Switzerland thanks to a bilateral agreement, The Free Movement of Persons, that the government signed with the countries of the European Union. It allows EU nationals free access to the Swiss labour market.