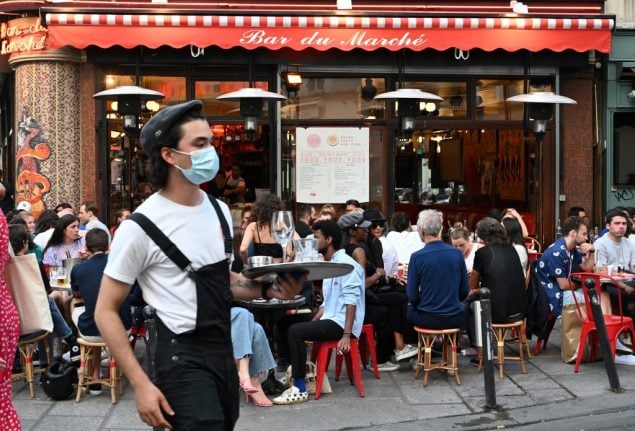 The mandatory closing of bars, cafés and bistrots during the coronavirus lockdown completely changed the face of the French capital.

For three months one of the most iconic experiences of Paris – loitering at a terrace café table with a coffee/beer/wine – was put on hold.

Paris cafés were permitted to reopen from June 2nd, but for the first three weeks they could only serve customers on their outdoor terrace spaces.

But even with the strict hygiene rules – spaced-out tables, arrows on the floor showing clients where to walk, extended terraces, masks – this didn’t mean coronavirus had disappeared, nor the anxiety of catching it. Many Paris cafés have been given to expand their outdoor seating areas. Photo: AFP

So how did Parisians react? Did they rush back to restaurants once lockdown was lifted or did they remain vigilant?

“I was really happy for restaurant owners, but I still don’t go to eat there,” said Anouk, 30, who was having a Perrier at a café in the 19th.

“I don’t want to mix with people, plus I discovered I could cook, and that’s great,” she said.

Instead of actually physically going to the restaurant, many opt for take-out or go out just for a drink.

“I often order take-out because I prefer eating outside or at home rather than inside a restaurant,” said Maud, 28, sitting at a terrace near Canal de l’Ourcq.

“But I do go out for drinks in bars,” she said.

Among the people we spoke with, Maud was not the only one to imply that there was a difference between eating at the restaurant and just going out for a beer or a glass of wine.

“In my mind having a drink is always outside as opposed to having a meal,” she said.

“Plus alcohol disinfects,” joked Max, 35, who was sitting with Maud.

After losing three months of revenue during the coronavirus lockdown, restaurant and café owners were relieved to be able to reopen.

Most of them were thankful that Paris city hall gave them the permission to extend their terraces until September 30th, allowing them to seat more customers while respecting the new health rules.

READ ALSO Should Paris cafés be allowed to permanaently expand their terraces? Many customers said they felt happier sitting outside. Photo: AFP

But what about customers? Did they come back?

“We didn’t have more clients since lockdown was lifted, I would say it is sort of the same, or maybe slightly less”, said Tom, waiter at Chez Mezig on Quai de la Loire in the 19th arrondissement, to The Local.

But the number of customers that restaurants now have really depends on the neighborhood they are situated in and whether they are located in touristy areas or in business areas for instance.

“Seventy per cent of our customers are regulars and on the day we reopened they were all there, and since then we have the feeling life has gone back to normal”, said Natalie, waitress at Koko bistro in the 19th.

“We feel very lucky because we are in a nice neighborhood and it does make a difference,” she said.

What about the “rush of customers” some say restaurants would experience?

“Some clients did rush back, but it was only during the first couple of weeks, because there was ‘the post-lockdown excitement’ and people wanted to go out, but now it has got calm again,” said Tom.

Among the people we spoke with, many said they didn’t hurry and that they were still wary of going back to public places.

“Lockdown gave rise to new habits and it’s also good for the wallet,” said Max about going to restaurants.

“We took advantage of déconfinement while still remaining cautious, and now we think twice about eating out”, he said.

Furthermore, Parisians seem really reluctant to go back indoors. In fact, a few of the ones we talked to pointed out the psychological aspect of being “outdoors” and how it reassured them.

“Customers all want to be outside”, said Tom.

“And that desire is only going to get stronger now that the government has announced it is mandatory to wear a face mask indoors in public places,” he said.