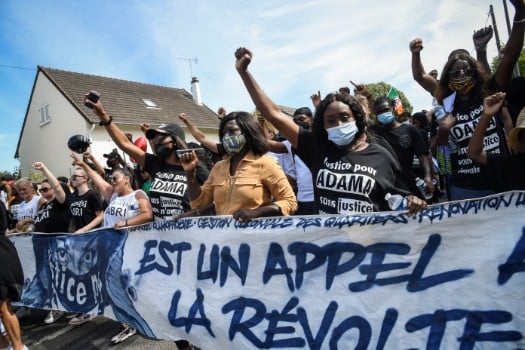 Family and friends of Traore continue to press for a full account of the circumstances leading up to his death amid heightened awareness of police brutality in a number of countries around the world.

The march — in the town of Val-d'Oise just outside Paris — was organised by an Adama support group and Alternatiba, an environmental group that is fighting against social inequality.

French judges have ordered a new medical inquiry to ascertain the cause of Traore's death in custody that made him a symbol of alleged police racism and violence.

Traore had been pinned to the ground by police officers, and fainted while being brought to a police station where he later died.

“No man, no person should die like that, at that age,” said Assa Traore, a sister who has led the fight on her brother's behalf and wants to see the officers charged with voluntary homicide.

The case was thrust back into the spotlight with the Black Lives Matter protests in the US sparked by the death of George Floyd after he was pinned down by a white officer's knee for nearly nine minutes.

In addition to people close to the family, demonstrators included members of the “gilets jaunes” movement who staged a series of sometimes violent protests in 2018-19.

Family members of a half dozen others who died by alleged police violence addressed the crowd, some of whom held placards that read “I can't breathe” — Floyd's words as he died.

In May, French medical experts exonerated three police officers involved in the arrest, saying that Traore did not die of “positional asphyxia”, or choking.

Instead, the experts found Traore died of heart failure possibly brought on by underlying health conditions in a context of “intense stress” and physical exertion.

French judges have now called on Belgian experts to conduct a forensic examination of the evidence, and their results are expected in January 2021.

“Instead of doing all kinds of examinations, they should just tell us the truth,” Traore's mother said Saturday. “I want justice done before I die.”