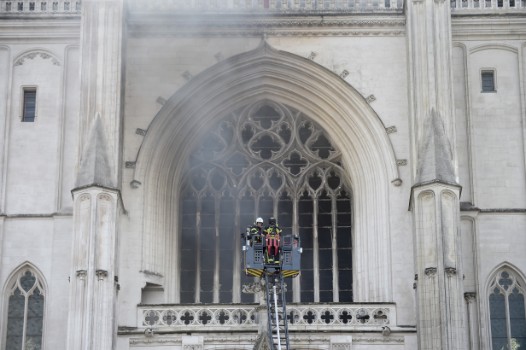 Officials said the cathedral's organ was destroyed and its platform could collapse, but added that the damage was not comparable to last year's fire at Notre-Dame Cathedral in Paris.

Fire crews were alerted just before 08:00 am (0600 GMT) to the blaze at the Cathedral of St Peter and St Paul and around 100 personnel rushed to the scene.

Prime Minister Jean Castex said he would visit the scene later on Saturday.

“I want to know what happened but first I'm going to show my solidarity with the people of Nantes,” Castex told reporters.

President Emmanuel Macron tweeted his “support for our firefighters who are taking all the risks to save this gothic jewel”.

The building was last hit by fire in 1972. Its roof took more than 13 years to repair.

Another religious building in Nantes — the Basilica of St Donatian and St Rogatian — was struck by a fire in 2015 that destroyed three-quarters of its roof.