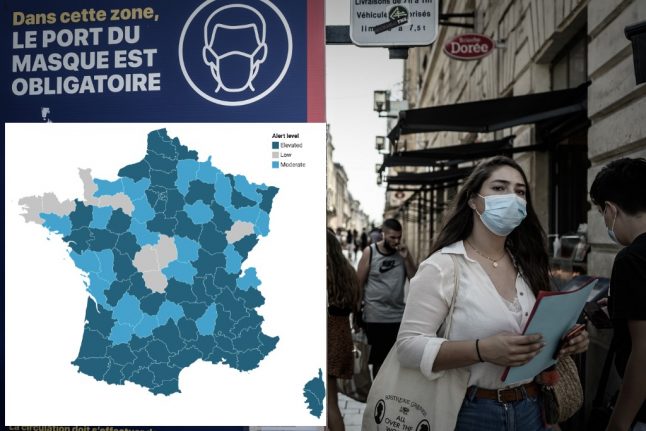 Of France's 96 mainland départements, 88 were considered at a “moderate” or “elevated” risk for Covid-19 by Santé Publique France in their latest update on October 1st.

A département's level is decided by Santé Publique France in consultation with the regional health authority. A range of factors are taken into account including the number of new cases, the number of clusters, the R rate, hospital admissions and the number of patients in intensive care.

The dark blue areas were those at elevated risk, which generally indicates a high level spread of more than 50 new cases confirmed per 100,000 inhabitants over the preceding seven days.

The lighter blue zones on the map were those at moderate risk.

Santé Publique France labels a département at 'moderate' risk generally when health authorities have registered between 10 and 50 new coronavirus cases per 100,000 inhabitants in the last seven days.

These are areas with fewer than 10 cases per 100,000 over the last 7 days and where there is little pressure on the areas hospitals from Covid-19 patients. As the map shows, there are not many of these “low risk” area left in France.

The map below from Santé Publique France also gives an idea of where cases are rising more rapidly than others. The ùap is based on the infection or incidence rates in different départements over the last seven days. The areas coloured dark blue are those with the highest infection rates.

The map is interactive so you can zoom in and hover your mouse over each département to find the infection rate.

What about red zones?

You might have also seen the French government's latest map, which assigns all areas in France a shade of red.

This rating is based on both case numbers and the pressure on local hospitals and – crucially – determines what restrictions are in place on daily life.

Areas show in pink have a lower level of restrictions than the red areas and dark red – the 'maximum alert zones' have the most restrictions of all.

So far only two areas – the metropole ares of Marseille and Paris – have been put on maximum risk which involves the closure of all bars, gyms, leisure centres and swilling pools and a ban on gatherings of more than 10 people.

Find out what your area is coloured on the restrictions map HERE.