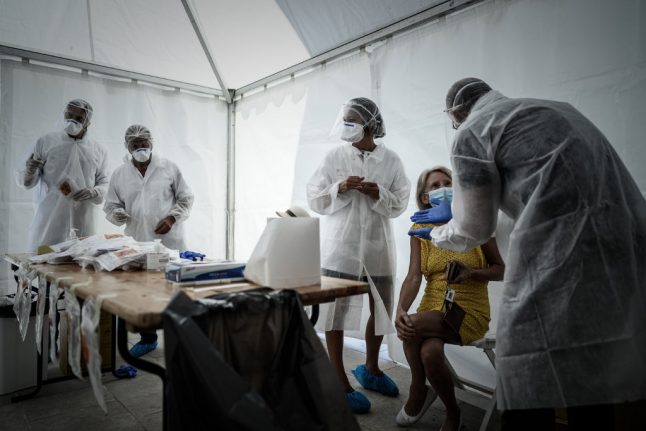 France is counting on extensive testing to crack down on transmission chains. Photo: AFP

France has seen confirmed cases rising by 30 percent a week over the last three weeks and health authorities have raised concerns about high levels of clusters in several areas of France.

So exactly how worried do we need to be about the latest numbers from Santé Publique France? And could we be heading back to lockdown?

READ ALSO MAP: Which areas of France are 'of concern' to health authorities over Covid-19 cases? The number of confirmed cases in France is rising. Photo: AFP

Looking first at the death rate, there were 14 deaths recorded in hospital in the last 24 hours, a much lower number than in March, when hospital deaths were peaking at around 800 a day.

After problems collating data, France now reports its care home deaths weekly rather than daily. Over the last week France has seen a total of 74 deaths in hospitals and care homes, just over 10 deaths per day. This daily average has been largely static over the last three weeks and has not seen an increase as case numbers rise.

The total number of deaths since the start of the pandemic now stands at 30,354.

Looking at hospitalisations, there are currently 5,012 patients in hospital with Covid-19, of whom 391 are in intensive care.

The overall number of people in hospital with Covid-19 continues the slow and steady decline that has been seen since April, with intensive care patients numbers seeing a slight increase last week before then decreasing again.

Health experts have long said that the intensive care patients is a key figure as this gives an indication of the likely death rate in the coming days. The total numbers are still well below the April 9th figure, which peaked at 7,148 patients in ICU.

However there is often a time lag between new cases and people being admitted to hospital.

Many of the newly diagnosed cases are in younger people who in general get milder symptoms. Health authorities are concerned that as families gather for the summer holidays the younger people will pass it to their older relatives who are more likely to become seriously ill, so the next two to three weeks will be crucial in watching hospital admission rates.

It's the number of new cases and in particular 'clusters' of cases that have got health authorities concerned.

There are currently 227 active clusters in France, an increase of 25 in 24 hours and up from 175 the previous week. A cluster is defined as three or more cases recorded within the last seven days that have a provable link, such as work colleagues, family members or people who attended the same event.

Case numbers are more difficult to compare to the height of the epidemic, as France has massively expanded its testing programme since May, leading to more people with moderate symptoms getting tested.

The 'track and trace' programme is also picking up people who may not have any symptoms at all. In total France has had 204,172 confirmed cases since February, of which 1,397 have been confirmed in the last 24 hours.

New case numbers per 24 hours rose to above 2,000 last week, and have now dropped slightly, but are still higher than can be accounted for by expanded testing alone, say experts.

Around 50 percent of the people who test positive have either no symptoms or mild symptoms.

There are now 21 départements that are classified as being in a situation of 'heightened vulnerability' – these are Bouches-de-Rhône, Nord, Val d’Oise, Haute-Garonne, Haute-Savoie, Ille-et-Vilaine, Gironde, Paris, Seine-Saint-Denis, Hauts-de-Seine, Val-de-Marne, Hérault, Mayenne, Sarthe, Meurthe-et-Moselle, Alpes-Maritime, Var, Oise and Vacleuse which are all classified as 'moderate'.

The overseas départements of Mayotte and French Guinea are classed as elevated.

Although overall the list is growing some départements, such as Finistère, were taken off the list while Mayenne was downgraded from elevated to moderate as they managed to get their case numbers under control.

READ ALSO When and where are masks compulsory in France?

The French government and the advisory Scientific Council have both stated that France will not return to the nationwide lockdown seen in March and April, but that local lockdowns could be imposed if necessary.

So far no numbers have been stated for what would constitute grounds for a local lockdown, but it is likely the criteria would include sharply increasing case numbers combined with pressure on local health services.

For the moment the government has made masks compulsory in all enclosed public spaces and is urging people to continue to respect social distancing and hygiene gestures, even as the sunny weather and prospect of holidays tempt people to become complacent.

Most experts still consider the autumn, with the cooler weather and the return to regular patterns of work, school and transport, the most likely time for a possible 'second wave' of cases.

Prime minister Jean Castex has asked all local representatives to draw up a plan for extra health measures in their area, should they become necessary.