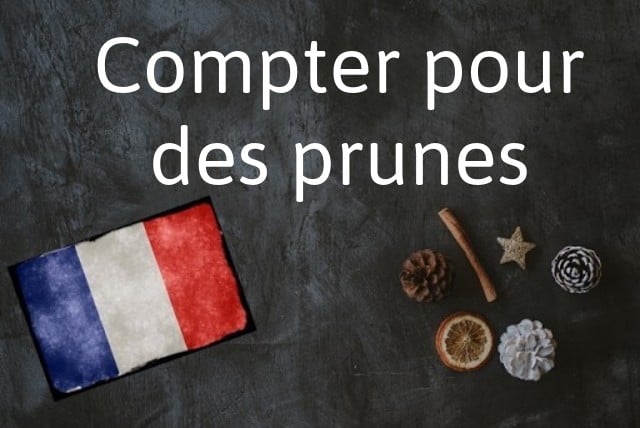 Because now you'll have a nice way of describing the times you've done something uselessly.

Compter pour des prunes literally means “counting for plums” but it actually means putting a lot of effort into something for very little or no reward.

An English equivalent might be 'for buttons' or you could say your efforts amount to 'a hill of beans' – ie virtually nothing.

You can also use it about yourself – Je compte pour des prunes – which means 'I count for nothing' but better translates as 'Nobody cares about me/takes me into consideration' – so if you're feeling a little self-pitying this is a good phrase, possibly followed by a flounce and a door slam.

But how did the delicious fruits turn into something that had so little value in the French language?

This meaning dates back to the 12th century at the time of the Crusades.

In 1148, the crusaders surrounded Damascus, “using the wood of the orchards of the town to strengthen their positions”, according to Hélène de Champchesnel in Faire la tournée des grands-ducs et 99 autres expressions héritées de l’Histoire de France.

But the inhabitants of Damascus moved the crusaders away, pushing them towards the orchards and beyond.

Forced to abandon the fight, the armies went back to “Jerusalem with for loot only a few baskets of plums. The failure of Damascus marked the end of the second Crusade”, according to de Champchesnel.

Lio, a famous French singer in the 80-90s, made an iconic song out of it, and many French people often refer to it.

J'ai tout rangé dans l'appartement, et ça compte pour des prunes ! – I cleaned everything in the apartment, and it counts for nothing!
Synonyms
Compter pour du beurre – counting for nothing