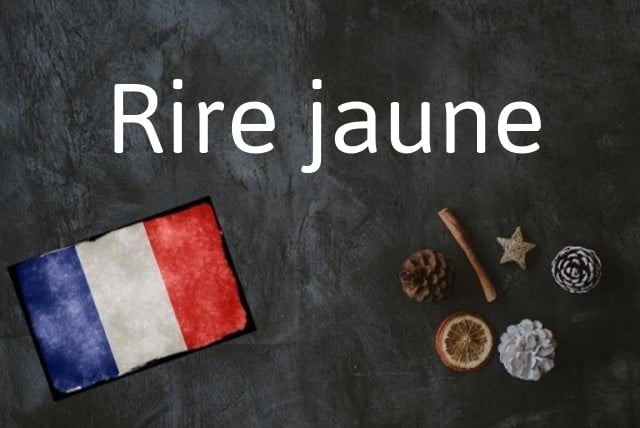 Why do I need to know rire jaune?

Because sometimes we laugh, even though we are not at all amused.

But it really means laughing in a forced way or to hide unease, irritation.

The colour yellow has been associated with different meanings over the years, symbolising both life and death.

Vivid yellow was associated with gold and the sun while matte yellow represented the colour of Sulphur, of hell and symbolised treason.

In the Middle Ages, yellow became the colour of Judas, the biblical character who betrayed Christ.

“From this ill-famed apostle, the symbol went to the Jews in general, who were obliged by the law in certain countries to dress in yellow –  a tradition that surfaced under Nazism with the sinister memory of the yellow star”, according to Claude Duneton in the book La Puce à l’oreille – Anthologie des expressions populaires avec leur origine.

According to Duneton, this expression first appeared in 1640 with the linguist Antoine Oudin who wrote Il rit jaune comme farine – He laughs yellow like flour.

So the expression Rire jaune and the hypocrisy it evokes comes to mean someone who is fake laughing.

Pauline riait jaune quand tu lui as dit qu’elle avait vieilli ! – Pauline forced herself to laugh when you told her she had aged!

Tu riras jaune quand j'aurais gagné! – You'll be laughing on the other side of your face when I win.