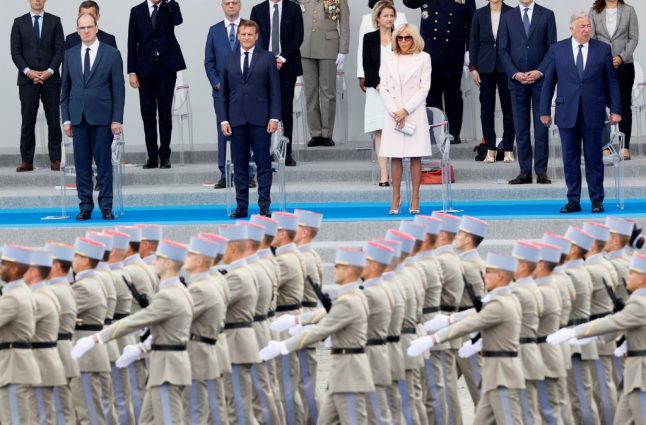 While jets performed their traditional flyovers over the Arc de Triomphe in Paris, authorities called off the annual military parade that marks the 14 July 1789, storming of the Bastille prison that launched the French Revolution. Instead, Mr Macron presided a scaled-down gathering of just 2,000 soldiers – half the usual number – at the Place de la Concorde, where several dozen doctors, nurses and others on the frontlines of the Covid-19 pandemic were given pride of place. Several were in tears as a military troupe saluted them with the national anthem “La Marseillaise” to close the ceremony, as Patrouille de France jets flew over trailing red, white and blue smoke.

Mr Macron personally thanked several of them as a light rain began to fall, a day after his government agreed an €8 billion package of pay hikes for nurses and careworkers. He then donned a face mask to visit with guests that included Tedros Adhanom Ghebreyesus, director general of the World Health Organization. Representatives from Germany, Switzerland, Austria and Luxembourg, the countries that took in 161 French virus victims at the height of the crisis, were also on hand. Later today, Mr Macron will hold a rare televised interview, reviving a 14 July tradition, to detail his plans for surmounting the crisis, even as fears grow of a second wave of Covid-19 cases that could again engulf hospitals.

He abandoned the ritual after taking office three years ago with a pledge to shake up politics as usual, but his new government is under pressure to prove it will rise to the unprecedented challenges.

Prominent doctors urged this week that face masks be mandatory indoors, while authorities have warned the virus appears to spreading faster in several areas as people let down their guard during summer holidays.

And despite billions of euro pledged to minimise the economic damage, questions remain over how the government will foster recovery from a recession expected to destroy hundreds of thousands of jobs.

Critics have accused the president of initially underestimating and then mishandling a crisis that has now caused more than 30,000 deaths in France, and so far Mr Macron has limited himself to a few televised addresses since March.

And some health workers say the government has still not done enough – protesters launched balloons near the Place de la Concorde bearing a banner that said “Behind the tributes, Macron is suffocating hospitals.”

“The president is going to announce very significant actions,” government spokesman Gabriel Attal told BFM television ahead of the ceremony.

No crowds were allowed anywhere near the Concorde square to avoid contagion risks, and just 2,500 guests were invited to a ceremony where only two WWII tanks trundled noisily across the paving stones.

The flyovers along the Champs-Elysees avenue included an A400M transport plane that was used to evacuate Covid-19 patients from overwhelmed hospitals at the height of the crisis.

The flights were part of Operation Resilience that Macron launched in March, which also saw a military field hospital set up in hard-hit eastern regions of the country.

The ceremony also honoured the Resistance hero Charles de Gaulle on the 50th anniversary of the general's death, and the 80th of his famous appeal of June 18, 1940, to not give up the fight against the Nazi occupation.

Large portions of Paris will remain closed today, including parks near the Eiffel Tower, to avoid crowds for the Bastille Day fireworks, and most other cities have called off their shows altogether.