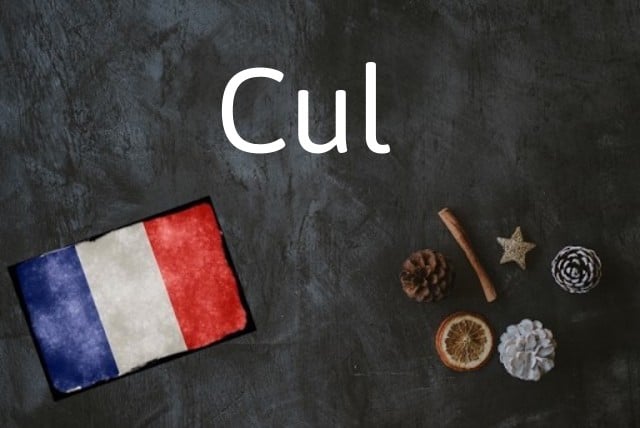 Why do I need to know cul?

It's a common slang term that you will hear frequently in France, but you also need to know how not to say it.

It means ass, arse, butt or bottom – a slang term for one's behind.

So you could say

Mon cul est énorme parce que j'ai trop mangé pendant le confinement – My arse is enormous because I ate too much during the lockdown.

But the word also has a certain blush potential for French learners when you're not saying it but people think you are. The very commonly-used word beaucoup (a lot) if not correctly pronounced sounds to French ears like beau cul (nice ass).

So you might think you're saying to the waiter who brought your coffee merci beaucoup – thanks a lot.

But he thinks you're saying merci, beau cul – thanks, nice ass!

As in English it can be used as a term of abuse – trou de cul (asshole) might be appropriate for the next driver who cuts you up on a roundabout – but it also forms part of a lot of phrases, none of which have anything specifically to do with body parts.

Some of the most common include faux cul which literally means 'false bottom' but actually means you are calling someone a hypocrite or a phoney.

Avoir des casseroles au cul – to have saucepans dangling from your butt – is used to describe politicians whose reputation is plagued by scandals, roughly the equivalent of having skeletons in the closet.