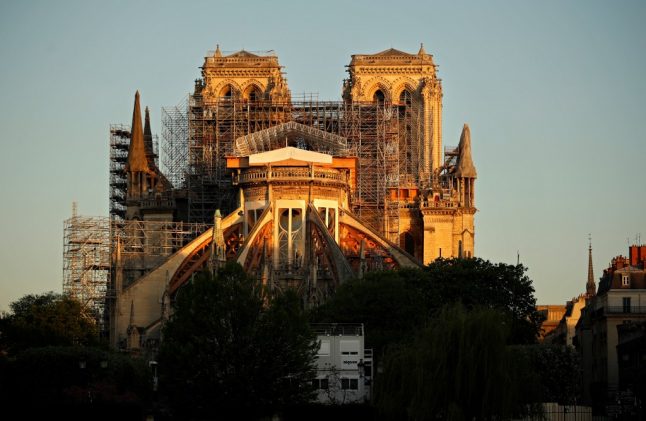 The gothic Notre-Dame cathedral has been lacking its spire since the blaze in 2019. Photo: AFP

The decision by Macron means that the 19th-century gothic spire, which crashed to the ground during the April 2019 blaze, will be now be rebuilt to its former glory after months of sometimes ill-tempered debates.

The gothic steeple, designed by French architect Eugene Viollet-le-Duc, took a large section of the cathedral's roof with it as a blaze tore through the rafters of the 13th century church.

Macron, who wants the restoration to be completed at breakneck speed in time for the 2024 Olympics in Paris, had indicated in the aftermath of the disaster he wanted a “contemporary gesture”.

But the Elysee said he now backed the cathedral's chief architect Philippe Villeneuve in wanting the spire to be rebuilt as it was.

“The president trusts the experts and approved the main outlines of the project presented by the chief architect which plans to reconstruct the spire identically,” said the Elysee.

His backing came after a meeting of France's national heritage and architecture commission (CNPA) Thursday on the reconstruction process.

Jean-Pierre Leleux, a senator leading the commission, confirmed to AFP after the meeting that it had agreed to restore the spire as it was. The spire collapsed during the blaze. Photo: AFP

Newly-minted Culture Minister Roselyne Bachelot had earlier told French radio “there was a large consensus in public opinion and among those deciding” for the 96-metre spire to be rebuilt as it was.

READ ALSO: 'Consensus' Notre-Dame spire should be rebuilt as it was

The reconstruction process has been plagued by delays due to bad weather, concerns over lead pollution, and most recently the coronavirus pandemic.

It was only in early June that workers began the delicate task of removing tons of metal scaffolding that melted together during the fire that destroyed the monument's roof and spire.

The reconstruction proper will only start in January 2021 once a consolidation phase is over, according to the archbishop of Paris, Michel Aupetit.

“The concern for the president was not delaying the reconstruction and making it complicated. Things had to be cleared up quickly,” said the Elysee.

IN PICTURES: Fire and reconstruction at Paris' Notre Dame cathedral

It said the whole process of designing a new spire — with an international competition for architects — could have caused a delay.

But with Macron not completely giving up on his idea for something contemporary, the Elysee said a modern touch could be used in the design of the surroundings of the monument. A Greenpeace activist hangs from a crane during a protest against the French government's politics on environment outside the Notre-Dame cathedral on July 9th. Photo: AFP

In a new headache for the troubled reconstruction process, four Greenpeace activists climbed a crane used for work on the cathedral and unfurled a giant banner to demand the French government do more on climate change.

The move raised the ire of Bachelot, who denounced potential “harmful consequences” to the “extremely fragile” reconstruction project.

Greenpeace France head Jean-Francois Julliard insisted the activists “did not touch the cathedral” and that their protest posed “no risk”.

There were sharp divisions about what to do with the spire which itself was added in the mid-1800s, replacing a medieval one that was removed in 1786.

Georgelin caused audible gasps in a meeting of the National Assembly's cultural affairs committee when he said Villeneuve should “shut his mouth”.

Georgelin said last week the delicate task of removing the twisted and molten scaffolding around the cathedral should be finished by the end of September.

The wooden roof of the cathedral caught fire during restoration works, sparking a vast outpouring of emotion – and donations for its rebuilding – from around the world.

Restoring the steeple as it was had also been backed by Viollet-le-Duc's descendants and, according to opinion polls, the French public.