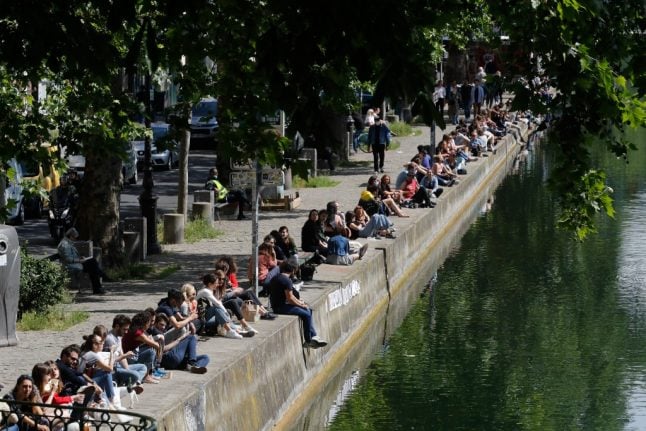 People sit on a bank of the Canal Saint-Martin in Paris after France eased lockdown measures in May. Photo: AFP

For a few weeks just after France began to ease its nationwide lockdown, walking down the streets of Paris was a radically different experience to normal.

In shops, restaurants and cafés people could be seen using hand sanitising gel to ward off potential coronavirus particles. Friends stopped greeting each other with the usual double (sometimes treble) cheek-kiss that is so typical for France, and resorted to an awkward elbow bump instead.

Do you feel people in France are getting too complacent about coronavirus hygiene measures?

Nearly two months into this new “normal”, authorities worry that the – initially rigorous – collective respect for the government's health advice has turned into complacency that, in a worst-case scenario – could spark a resurgence of the epidemic.

“This summer could go very well, but only if measures of social distancing are kept,” said Jean-François Delfraissy, president of the Scientific Council convened by the French government to advise on coronavirus-related measures.

“I am struck by the fact that this is no longer the case,” he told French media.

The agency said “the circulation of the virus was progressing”, albeit at a low level.

It also said the famous R-rate – the reproduction rate of the virus – had risen above 1 and was well above 1 in certain regions of the country such as Pays-de-la-Loire and Nouvelle-Aquitaine.

If the R-rate rises above 1 it means every Covid-positive person on average spreads the virus to more than one person.

There were numerous active clusters being investigated around the country and Le Parisien newspaper reported an increase of infections along children, believed to be linked to the reopening of schools.

Delfraissy is not the only public figure who has warned the French about becoming careless.

Asked about whether the French were “slacking off” on protective measures, Health Minister Olivier Véran reminded that it was important that the country “don't forget them” in an interview with BFMTV.

“I am not anxious by nature, but I am an observer. I can tell that there has been slacking off in all social spheres”, he said.

Jerome Salomon, the head of France's national health agency, also warned about a second wave of coronavirus cases in an interview with the Figaro newspaper.

“What we have to understand is that the epidemic's resurgence will depend on our behaviour,” he said.

So have the French become careless?

While the government has relaxed most of the strict health rules in place during lockdown, a number of rules and guidelines remain in place.

However many of these rules are merely advisory and sometimes it's hard to enforce them. Face masks is one such example – it is mandatory on all public transport, but only recommended on the street or in the company of others (except in some public spaces).

“I wore the face mask until recently, but when I realised that nobody around me was wearing it, I stopped because I thought I looked silly,” said Léa, 23.

Léa was walking in Paris with her friends, Adrien and Pauline, all in their 20s. All three admitted to having relapsed into old habits in the weeks since the lockdown ended.
Léa said she had gone back to greeting her friends – but not strangers – with a la bise.

La bise is the long-standing French tradition of greeting each other with kisses on the cheek. The government asked the French to stop doing la bise during the pandemic to limit the spread of covid-19.

Léa said declining to kiss or hug could be tricky in some social contexts.

“One time, I didn’t want to do la bise to a girl, but she told me I had to relax, that she wasn’t sick,” she said.

“Finally, I did it, although it really bothered me.”

Charlotte said she was not afraid of being straightforward when she didn’t feel like cheek-kissing.

“I just greet people with my elbow now,” she said.

But Adrien said: “I more often do the bise than not.”

“Now that gatherings such as fête de la musique are happening again, I think it’s ok”, he said.

Fête de la musique is an annual musical event in the end of June where cities all over France turn into street parties with pop-up concerts on sidewalks and in bars and restaurant.

The government was criticised for not having cancelled the event this year, which attracted quite large crowds, especially in Paris.

“Some protective measures are kept in place, people are wearing face masks in the bus and in most shops, but I still think people aren’t being careful enough,” she said.

She and her family had however firmly stuck to their new coronavirus health routines.

“I don’t do la bise, and people around me don't either, we wash our hands all the time, she said.

Emmanuelle was still working from home.

“My boy is six years old, and at school they are being really careful, they apply all the protective measures”, she said.

Daniel, 74, also told The Local he was still being very careful.

“I wash my hands even more, it has become obsessive,” he said, adding:

“Sometimes when I am taking a walk in the neighbourhood I stop at the park to wash them because they put fountains with soap.”

Some in France fear that, as has been the case in other countries, younger people are more careless about health routines than older people, who have a higher risk of getting seriously ill from the virus.

In Paris, participants at “improvised” street parties known as “ProjectX” were criticised for not complying with general rules of social distancing.

“Will this relaxation have consequences?” the scientific council's Delfraissy asked, before replying that a second wave was “likely to return in October or November.”

“It is essentially our behaviour that determines whether or not we recover from the pandemic,” he said.

What's your view? Are people in France being complacent about hygiene measures? 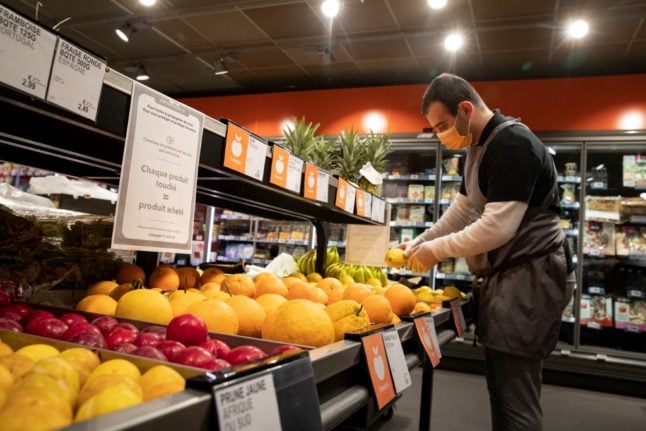 If you’re driving on French autoroutes one of the things you need to know is that they are not free – you will have to pay regular tolls, payable at toll booths known as péage.

Usually, drivers pick up a ticket from a booth at the start of their journey, then pay the required amount at a booth at the end of it – or when they move onto a different section of autoroute – based on the distance they have travelled.

But the toll booths themselves can be busy, especially during the summer, and long queues sometimes build up.

This is where automated pay systems – known as télépéage – come in, especially for those who use the motorway network regularly.

As well as allowing you to pass straight through péages without stopping for payment, it’s also very useful for owners of right-hand drive vehicles, who may otherwise find that they’re sitting on the wrong side for easy and speedy payment.

Here’s how it works

The website is available in English, French, German or Dutch.

You will need to supply bank details (IBAN number), address (for delivery), mobile phone number (to activate your account) and the vehicle’s registration details.

Your badge will be dispatched to your address within 48 hours from the opening of your online account. You can have the device sent to addresses outside France, but allow longer for it to arrive.

If you’re in France, you can also pick up the device at one of Bip&Go’s stores, if you prefer – you will need need your bank details, proof of identity and a mobile phone.

Place your device on on the windscreen to the right of the rearview mirror. It is activated and ready to go. Then, simply, drive.

All toll booths are equipped with the sensors that recognise that the vehicle is carrying the necessary device. At most, you will have to stop briefly for the device to be recognised and the barrier to lift.

You will also be able to drive through certain booth areas without stopping. These are indicated by an orange t symbol on the overhead signs. The maximum speed you can pass through these booths is 30kph.

Payments are processed automatically. You can monitor the amounts you have to pay on an app.

Do I need separate badges for motorway networks run by different companies?

No. The badge allows holders to travel on the entire French motorway network, no matter which company manages the motorway, and you can also use it to cross a number of toll structures in France such as the Millau Viaduct, the Tancarville Bridge or the Normandie Bridge, and pay to park in more than 450 car parks.

Is it only valid in France?

No, with certain packages, you can also as easily travel on motorways in Spain, Portugal and Italy, and use a number of compatible car parks. You can even use them on Italian ferries.

Okay, but how much does it cost?

Subscriptions to the Bip&Go service depend on what type of service you want. A fixed price rolling subscription is €16 a year – plus toll charges – but assumes you’re a regular user of French motorways.

A pay-as-you-go subscription is €1.70 for every month the badge is in use – plus toll charges – and carries a €10 additional fee if the badge is not used in a 12-month period.

How much are the toll charges?

They depend on the road you’re on, how far you travel along it, and the vehicle you’re driving.

Heading from Toulouse to Biarritz along the A64 will cost a total €23 in fees for a private car and if you’re driving all the way from Calais down to the Mediterranean coast expect to pay around €70 once you add up the various tolls along the way.