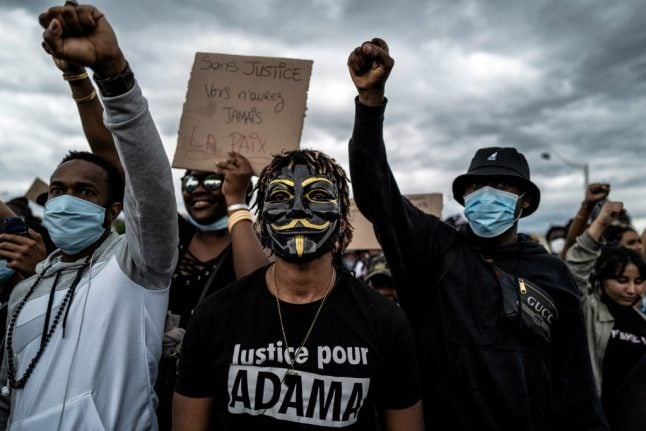 Protesters in France have been demanding 'justice for Adama" Photo: AFP

Lawyers for the three officers under investigation in the case said Friday that judges requested the examination after hearing fresh testimony from a key witness last week.

Traore, a 24-year-old black man, fled to the witness's apartment in Beaumont-sur-Oise, north of Paris, after escaping custody when he intervened as police tried to arrest his brother.

Officers eventually found him and pinned him to the ground with the weight of their bodies, and Traore fainted while being brought to a police station where he later died.

The witness, who has not been identified by name, initially told police that Traore was having difficulty breathing when he arrived on a hot day in July 2016.

That appeared to corroborate the officers' claims that Traore was already in critical condition when taken into custody, and a series of medical reviews, including one released in May, exonerated the officers.

But last week, lawyers for Traore's family, which has insisted that he died by suffocation, said the witness had retracted his original statement suggesting respiratory distress.

The family has twice hired its own experts to analyse the two official autopsies and medical reports, which they say prove Traore was killed by an “acute asphyxial syndrome” – essentially choking.

The officers' lawyers, however, say the witness essentially confirmed his statements, including that Traore said “I'm going to die” before they arrived to arrest him.

“The judges have ordered a panel of Belgian experts to undertake a forensic examination,” the lawyers said in a statement.

“The officers welcome this study, which poses the hypothesis of malignant hyperthermia” – a rare and severe reaction to intense activity in high heat.

They also said that choosing Belgian doctors would “reduce the media pressure generated by the all sorts of statements by the civil parties.”

READ ALSO: Who is Adama Traore and why are there protests in his name around France?

Traore's death sparked several nights of unrest by youths alleging it was the latest example that blacks and Arabs are often the targets of police brutality.

The case was thrust back into the spotlight with the Black Lives Matter protests in the US sparked by the death of George Floyd after he was pinned down by a white officer's knee for nearly nine minutes.