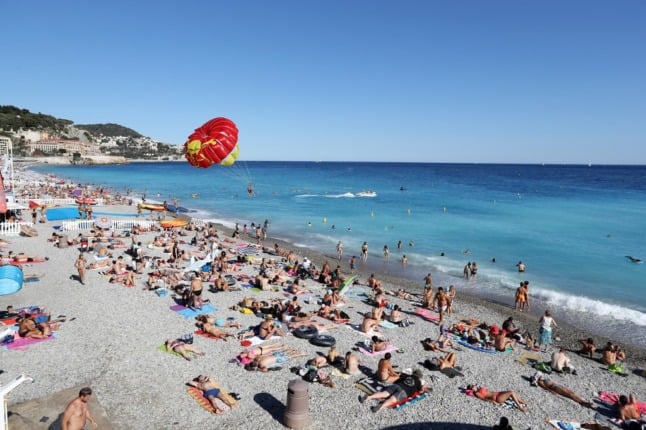 When do you prefer your beach time? Photo: Valery Hache/AFP

Summer holidays are a big deal in France, with cities emptying out in July and August as people head to the coast or the countryside and it’s common for people to take a month off work – but which month?

One of the most iconic forms of rivalry between French holidaymakers is the opposition between the juilletistes and the aoûtiens – those who go on holiday in July versus those who prefer August.

And the final weekend of July is usually one of the busiest weekends of the year on the roads as juilletistes return and aoûtiens set out. It even has a special name – chassé-croisé.

The terms date back to the summer of 1969 when a fourth week of paid leave was voted into French law. It was a milestone piece of legislation that laid the basis for one of France’s most important annual traditions, les grandes vacances (the “big” summer holidays).

Suddenly eight out of 10 French people were able to take a summer holiday. Some chose July, others preferred August – made possible by the fact schools in France close for pretty much the whole of July and August.

But traditionally, the month you took your holidays reflected more than a simple preference.

Back in the 1960s the August holidaymakers were largely working class as this was the month factories closed across France. July on the other hand was reserved for executives and professionals. The idea of the ‘well-to-do’ July clan was contrasted with the ‘working class’ August clan.

The clichés grew into deep cultural stereotypes. The juilletistes were seen as lazy people who escaped to an exotic place while everyone else was still working hard, only to return to work in August when things are still calm. (Of course a juilletiste would say someone needed to keep the country running while the workers went away on holiday

Does the divide still exist today?

Times have changed and people no longer have the same habits. Over the years, as the service sector expanded and changed, the divide between the two different casts slowly faded away as people began to pick their holiday month based much more on personal preferences and workplace demands.

It’s now safe to say that this rivalry is no longer accurate, although it remains firmly installed in the French psyche.

August still remains the emblematic summer month – even more so than July – with cities virtually emptying and everything seemingly closing down. It’s common for local shops, cafés and pharmacies to be closed for the month, with signs simply reading ‘back in September’ and you should probably forget about getting any administrative task done during August.

READ ALSO The 8 signs that August has arrived in France

But for several years now, there has been a new tribe, the septembristes, who wait for September before packing up their things – probably to avoid the juilletistes and the aoûtiens.

As schools return in September, the septembriste is not a category easily accessible to everyone, but mostly made up by the young, the child-free and the elderly.

The Communist leader Fabien Roussel has called on town halls to close on Tuesday in ‘solidarity’ with the strikes. The decision is down to each individual commune, but in Paris the mayor Anne Hidalgo has announced that the mairie will close for the day, so you won’t be able to keep administrative appointments, although city services like bin collection will run as normal.