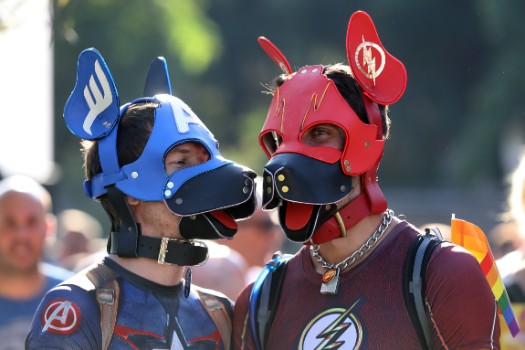 Participants at a Pairs gay pride march in 2017. Photo: AFP

A young, multicultural crowd marched behind a lorry bearing a banner declaring “our pride is political”, carrying rainbow flags, coloured hair and some dressed in drag.

Among the banners were ones calling for “a radical pride” and others denouncing transphobia.

The official Gay Pride march due to take place on June 27 was cancelled because of restrictions on large gatherings as a result of the coronavirus crisis. It is now due to go ahead on  November 7.

But Emma Vallee-Guillard said Saturday's rally was in response to a call made by several LGBT groups and it was important to mark the event.

“Pride, in the beginning, was a riot,” she said.

The first Gay Pride march was held in 1970 in New York to mark the first anniversary of the city's Stonewall riots, a landmark event in the gay rights struggle, sparked by a police raid on a gay bar.

This year marks the 50th anniversary of that first Gay Pride march.

“The danger of rolling back our fundamental rights is very present and the epidemic has revealed multiple factors of exclusion, discrimination and violence,” Giovanna Rincon, director of the association Acceptess-T, which defends transgender people, told AFP.

Many Gay Pride events around the world went online this year, to get around restrictions imposed by the pandemic.