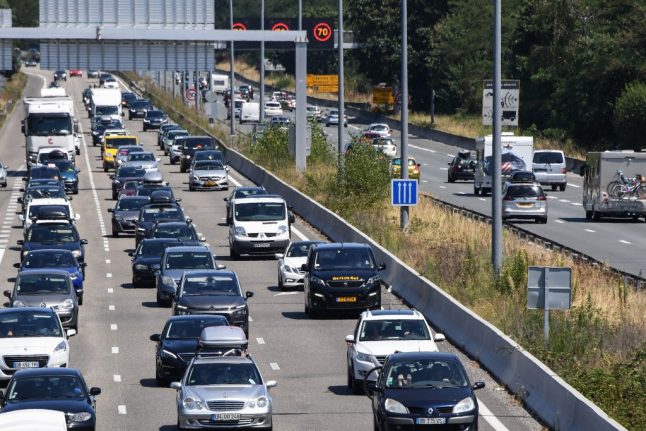 In France, like most countries, les grandes vacances (the big holidays) is an important annual event. Every summer, the French take weeks off work to head away on holiday. Schools close for two months, shops close and even many boulangeries.

The French summer holidays begin when schools break up and last until la rentrée (school start), which this year is July 3rd (or 4th if the school has Saturday classes) until Tuesday September 1st.

What happens during the grandes vacances?

Basically most of France takes a holiday which means there's a lot of people moving around the country. Which can mean a lot of traffic on the roads on certain days, especially Saturdays throughout the holidays.

How bad is traffic going to be?

Bison Futé, the government-run site that monitors traffic levels, has classified traffic for those leaving for their holidays in Paris this weekend as red – the second highest level – which means the situation on the roads will be “very difficult”.

The rest of the country is classified as orange – which means the situation on the roads will be “difficult” on Friday and Saturday.

Traffic in the other direction – with people coming back from holidays – will however be largely as normal across the country all weekend. A of next week, roads will become even more crowded.

From July 14th to August 15th, roads will be between 30 to 70 percent busier than usual, according to the French highway association Asfa

Bison Futé has marked the following dates as days to avoid: July 11th, August 1st and 8th for going on holiday and August 22nd and 29th for coming back.

Keep up-to-date with the situation on their website here.

Is everyone going by car?

Not everyone, but this year – due to the coronavirus health crisis – many people say they will choose the car above other means of transport to avoid crowding in trains or planes.

National rail operator SNCF has said it expects its train ticket sales to drop by 20 percent this summer compared to last year.

In July, the operator said it expected about 50 percent of its normal sales levels, while August would be a slump down to only 15 percent of normal levels.

Where are the French going this year?

More people than usual are opting for staycations this year after the coronavirus pandemic brought international travel to a standstill for several months.
As usual, most people want to be close to the ocean.
Among the most popular French destinations are Brittany and Normandy – both on the northwestern coastline – along with other lesser known places near the sea, but also in the mountains and in the countryside.
READ ALSO: 15 beautiful sites to visit in France before the world finds out

More people than usual are looking for peace and quiet when booking their summer getaways, and France's more secluded areas have reported a surge in demand from tourists – both international visitors and French residents – eager to explore less popular destinations this year.

READ ALSO: The 10 quietest areas in France to visit this summer
Are people going away for two months straight?
French people don't actually take off on holiday early July only to come back at the end of August. Nor does the whole country switch off for the entire month of August, although cities – especially Paris – are remarkably calmer in August than the rest of the year.
Authorities even have rules for boulangeries in Paris during the summer to make sure they don't all go on holiday at the same time and Parisians can't get any bread.
The French have five weeks of mandatory holiday a year and most people taking a few weeks off in July or August.
The picture below is a chart of French holiday tendencies since 1979, showing how the July-August period has a longstanding tradition as being France's favourite holiday months. In fact, the two months have become emblematic symbols of two different kinds of holidaymakers, juillettistes and aoûtiens – people who go away in July versus those who prefer August.
Most of the differences are based on myths that the juillettistes, are more “chic” than aoûtiens, as the latter group used to be more working class (people who went on holiday when the factories shut down).
However in recent years a new group has been created, les septembristes, referring to those who go on holiday in September.

What do the kids do?

The grand parents are normally in demand in the summer, but due to Covid-19 fears, grand parents may understandably not be offering themselves as babysitters this summer. Local authorities run holiday clubs at schools known as centres des loisirs which will be heavily in demand this summer.