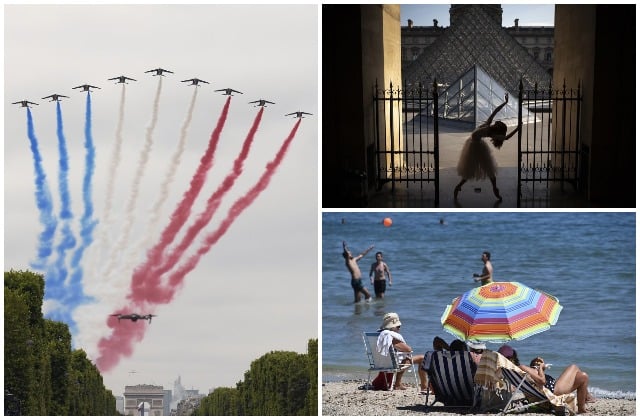 France reopened its borders for European travel on June 15th, and from July 1st visits to France will also be possible from outside Europe – but not for everyone.

READ MORE: Which countries are on the list of those permitted to enter France?

French schools break up for summer holiday on July 3rd (or 4th if the school has Saturday classes).

While things may of course be slightly different this year due to the current health situation, roads are usually crowded on those days because people tend to go away on holiday. You can check out the public school holiday calendar here.

July 14th is the French fête nationale, which this year will be celebrated in a slightly different manner to avoid large crowds and limit health risks. The traditional military parade will be replaced by a ceremony to pay tribute to the country’s health workers, hailed by the government as heroes fighting the coronavirus pandemic on the front line. In bad news, most places have cancelled their bals des pompiers – where you get to party with French firefighters. The Louvre museum in Paris has been closed since March. Photo: AFP

The Louvre museum in Paris, home to the Mona Lisa, is to reopen on July 6th, following in the footsteps of other tourist attractions that have reopened in the capital.

READ ALSO: The health rules for visiting the Eiffel Tower and the Louvre this summer

On July 15th France will kick off its annual summer sales, which were postponed from June 24th on request from shopkeepers who feared for their livelihoods after the coronavirus crisis saw their incomes plunge. The sales will last four weeks and end on August 11th.

READ ALSO: What you need to know about France's summer sales

If you're in France and planning a staycation this summer, the national rail company SNCF has put a range of tickets on sale for its low-cost service Ouigo.

If you need tips on where to go on holiday this year, here is a look at where French holidaymakers are planning on heading this summer, and – in case you're looking to go somewhere few others are going – a look at the quietest areas of the country and what they have to offer tourists.

If you want to go further than a domestic holiday this summer, the high-speed trains between France and Spain are getting back in business on July 1st as well. Renfe-SNCF connects a series of French and Spanish cities – trains run from cities Perpignan, Narbonne, Béziers, Agde, Sète, Montpellier, Nimes, Avignon, Aix-en-Provence, Marseille, Valence and Paris in France to Barcelona, Girona and Figueres in Spain.

Two services a day will run from July 1st and the schedule will be expanded as demands increases, according to the company.

There will be strict health rules regulating travel – all passengers and staff must wear masks on the train – and cleaning as to reduce health risks.

France’s main scheme supporting businesses and workers through the economic downturn caused by the coronavirus lockdown is in the process of being gradually reduced, after the government radically expanded the scheme in March to respond to the current health crisis.

Known in France as chomage partiel (partial unemployment), the scheme was set in place to avoid mass layoffs during the strict, nationwide lockdown, permitting employers to register their employees as partially unemployed and receive state help to pay salaries.

General unemployment benefits will be raised by 0.4 percent on July 1st for 92 percent of all of France's registered unemployed people.

A person on the minimum benefit scheme will receive €29.38 a day compared to €29.26 today. The increase will only concern people who have been receiving benefits for a period extending 6 months (about 2.4 million people). The remaining 470,000 registered people will only see a general increase of the fixed part of the allowance, by €0.05.

The French government postponed the end-date of the annual trêve hivernale (winter truce), which prohibits landlords from evicting tenants during the coldest month or the year, from March 31st to July 11th.

As of July 11th, landlords may evict their tenants and some fear the months of economic downturn caused by the coronavirus health crisis could spur mass-evictions in July. Some companies are trying to make it easier for people who have seen their incomes drop over the past months, like French electricity provider EDF, which has said it will not switch off gas or electricity in homes that haven't paid their bills before September 1st.

After months of decreasing gas prices – in June they dropped by 2.8 percent – French utility multinational Engi continues the trend although with a slight drop by 0.3 percent on July 1st.

One year after the city of Paris introduced the rent ceiling rates as a measure to curb the surging prices, the ceiling will change on July 1st. To find out what is the legal maximum rent in your area, check out this map where you can fill in information about the apartment or house and click on your neighbourhood.

In some cases this could mean the landlord will be within their rights to request a rent increase, “if the property has particular characteristics,” according to the Paris mayor’s office.

Before the end of 2020, the French health ministry's wants cigarette packs in France to cost €10 a pack, a goal aimed at reducing tobacco use in the country. After a general increase of all cigarette packs in March, a small minority of the total brands will see a price increase on July 1st (list here). A new general increase will happen on November 1st, from €9.30 to €9.80 per pack of 20.

As of July 1st people on the Disabled Adult Allowance (AAH) scheme in France will see their pensions automatically liquidated when they turn 62, without having to make the request. They will be notified about this at least six months earlier and can decline the procedure if they wish.
The measure has been put in place to prevent people from suffering an income interruption between the day they apply for their pensions and the day they receive them.