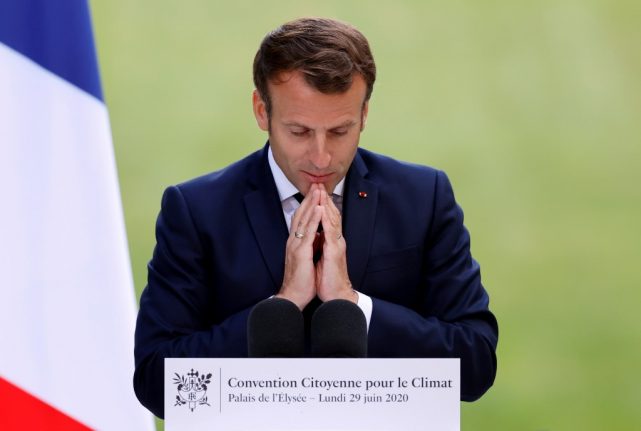 French politics, dynamited by Emmanuel Macron in 2017, has been blown apart once again in the second round of the municipal elections.

The triumph of the Greens in three big cities, Lyon, Bordeaux and Strasbourg, and a string of smaller ones, transforms the political landscape.

No, it doesn’t mean that France will elect a Green President in 2022. The quarrelsome French greens will find it hard to transfer their successes to national level.

Yes, the result was skewed by the dismal turn-out for a second round which was delayed for three months by the Covid lockdown. Older people, especially, failed to vote in their usual high numbers, magnifying the green votes of the young.

Outside the prosperous big cities and large towns, the Greens – or Europe-Ecologie-Les Verts (EELV) – are almost non-existent.

In big cities, the Greens attracted many of the young or youngish, well-educated urban voters who had supported Macron in 2017. In smaller towns voters moved towards the centre right – reflecting the divide exposed by the original Gilets Jaunes in 2018 between prosperous, outward-looking metropolitan areas and conservative, inward-looking towns and countryside.

The two great losers on Sunday (despite some victories) were the two personalities and political forces which disputed the second round of the presidential election in 2017 – and may do so again in 2022 .

Emmanuel Macron’s La République en Marche (LREM) won hundreds of “new” council seats because the party did not exist when the last local elections were held in 2014. But it captured no town of any size. Its candidate for mayor of Paris, Agnès Buzyn, came a miserable third with 13 percent – in a city where Macron got 90 percet in the second round in 2017. The French green party EELV celebrates the election of their candidate Pierre Hurmic as the new mayor of  Bordeaux in Bordeaux. Photo: AFP

Coalitions including the LREM lost to the Greens in Strasbourg and Bordeaux. The only big government victory was the 59 percent score for the Prime Minister, Edouard Philippe, in Le Havre. But even that, arguably, was an embarrassment for Macron.

Philippe, from the centre-right, has never joined the LREM. His big victory was a personal one – a confirmation of his high ratings in national polls where he currently basks in the mid-50’s, 12 -15 percent ahead of his boss.

In the wake of that great success, can Macron sack Philippe when he reshuffles the government this week or next? Alternatively, can Macron afford not to?

If Philippe remains, he will do so with enhanced prestige and power – almost a co-President rather than Prime Minister. That is the opposite of what Macron wants. He believes his chance of winning a second term in 2022 depend on him playing a more hands-on role in the next two years.

He also wants to shift towards a more green and a more socially caring agenda. Philippe does not. In other words, a double-helix conundrum faces the President when he reshuffles the government this week or next.

Macron likes to take risks. He doesn’t like to be overshadowed. He wants to shift policy in ways that Philippe dislikes. But the country may be angered by the loss of a very popular PM.

It is a decision which could make or break Macron’s chances of re-election.

The other great loser on Sunday was Marine Le Pen. Yes, her estranged former boy-friend Louis Aliot captured Perpignan in the south west, the biggest French town to fall to the far right since Toulon in 1995.

But Aliot was running as leader of a “far right” coalition, including the RN. He has distanced himself politically, as well as romantically, from Marine Le Pen in recent weeks.

Elsewhere the RN won a couple of very small towns and lost a couple. It also lost the 7th district of Marseille – a local town hall whose capture in 2014 was supposed to herald a far right advance in big cities.

Six years ago,  the RN – then the FN – took 1,438 seats in 463 towns. Yesterday they took 840 seats in 258 towns. For a party which considers itself the main opposition to Macron, this was a poor outcome.

The Rassemblement National and Macron’s LREM share similar strengths and weaknesses – the reverse of the weaknesses and strengths of the Greens. They are national forces with strong national leaders which have failed to grow grass roots in local politics.

Another great loser on Sunday was the hard left, both the Communist version and Jean-Luc Mélenchon’s La France Insoumise. The Communists, non-existent as a national force for 20 years or more, lost several of their remaining municipal bastions, including Saint Denis just north of Paris. The Mélenchon party scarcely figured in this election, except as part of a wide left coalition which narrowly triumphed in Marseille.

We are now in strange territory for French politics.

Everything was once predictable. There were two main “families”, centre-right and centre -left, who took turns to govern, nationally and locally, in much the same way once they were in power. The whole two round system of elections was designed to reflect – and preserve – that status quo.

The rise of the Lepennist Far Right changed that in 2002. The emergence of Macron’s new centre added a fourth force three years ago. Mélenchon and the hard left looked for a while like a fifth.

The EELV may now emulate its green German sister party and take over the centre-left lane in French politics from the divided Socialists. Even so, the dawn of the Greens threatens to add yet another competing “family” to a French political system designed for only two.

The first round of the presidential election in 2022 will be a lottery. A crowd of candidates with percentage support in the high teens or early twenties will jostle for the two golden tickets to the second round.

The result could be decided by a few thousand votes. The once seeming certainty of a Macron v Le Pen re-match may not be so certain after all.