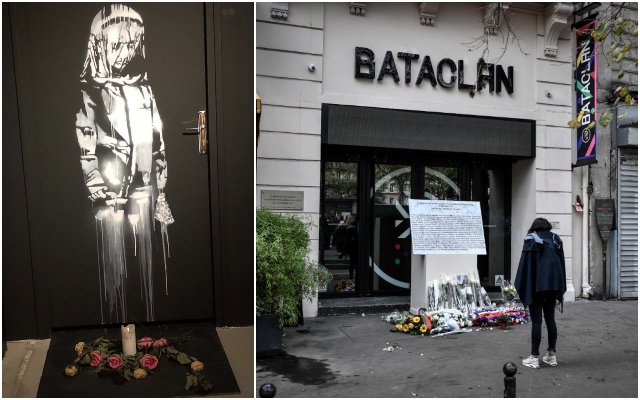 The suspects were arrested across France this week after the artwork, an image of a girl in mourning painted on one of the Paris venue's emergency doors, was found in Italy earlier in the month, judicial and police sources told AFP.

The door with the artwork was cut out and taken in January last year at the Bataclan, where Islamic State gunmen massacred 90 people in one of a series of bloody attacks in Paris in November 2015.

French and Italian police said two weeks ago that they found the work — still in good condition — in the attic of an abandoned farmhouse in Italy's central east Abruzzo region.

Its theft — which was caught on surveillance videos showing hooded figures using an angle grinder to cut the door out — had caused “deep indignation,” the Bataclan said last year.

It was “a symbol of recollection and belonging to all: locals, Parisians, citizens of the world has been taken from us”, the venue said.

One of the French policeman who intervened in the 2015 Bataclan attack was present when the door was found, Christophe Cengig from the Organised Crime Unit at the French embassy in Rome told AFP.

“It was a very emotional moment for my colleague,” he said.

“Coming here, finding it… it has a strong symbolic and emotional value, so we're very, very, very happy”.

The dramatic white stencil of a sad-faced girl on a black door was created when the artist “blitzed” the French capital with murals during a whirlwind 2018 trip.

Works by Banksy, known for their distinctive style, irreverent humor and thought-provoking themes, have been found on walls, buildings and bridges from the West Bank to post-Hurricane Katrina New Orleans.

At auction, they have sold for more than $1 million.

Banksy is believed to have started out as a graffiti artist in London, although he has kept his identity a secret.

The Bataclan door is not the only of his works to have been stolen from Paris.

Others include a mural of a businessman in a suit offering a dog a bone, having just sawed the animal's leg off, and an image of a masked rat wielding a box cutter, which disappeared from outside the Pompidou Centre.

Some of the stolen works have since been recovered and fans have covered some of his Paris street art with Plexiglass to protect them.