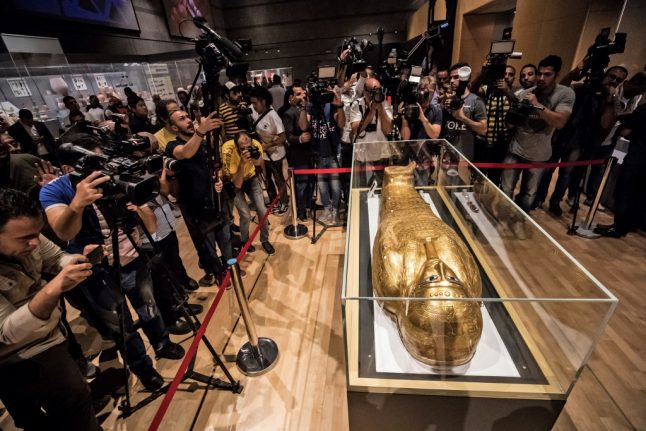 The case involves antiques worth millions such as the sarcophagus of ancient Egyptian priest Nedjemankh. Photo: AFP

Christophe Kunicki and his husband Richard Semper were charged in Paris with a range of crimes including fraud, money laundering and forgery, a judicial source and a source close to the inquiry told AFP.

The pair were presented to a judge and released under judicial supervision.

The two men were arrested along with three other suspects on Monday and Tuesday during searches of prestigious Parisian art markets and antique dealers.

Antiques worth tens of millions of euros are thought to have been taken from countries including Egypt, Libya, Syria and Yemen, often through the renowned Pierre Berge auction house based in Paris.

The three other suspects — Pierre Berge's director, a former curator at the Louvre museum, and an eminent Parisian gallery owner — were released without facing the investigating judge.

Kunicki and Semper, widely respected figures in the rarified world of Parisian antiquities, are suspected of taking advantage of the instability that followed the Arab Spring in the early 2011 to loot ancient relics.

Such trafficking would likely have involved hundreds of relics valuing tens of millions of euros, according to sources close to the inquiry.

Agents from France's Central Office for the Fight against Traffic in Cultural Goods (OCBC) are investigating whether the high-profile suspects falsified the origin of the items with the help of intermediaries in the involved countries.

That invented history would then have allowed the items to be resold to individual buyers as well as globally esteemed institutes such as the Louvre Abu Dhabi and New York's Metropolitan Museum of Art.

Kunicki, a Mediterranean archaeological specialist and member of the French Society of Egyptology, and his husband had previously been linked to a sarcophagus plundered in Egypt in 2011.

The sarcophagus of ancient Egyptian priest Nedjemankh moved through Dubai, Germany and Paris before Kunicki sold it to New York's Met for €3.5 million ($4 million) in 2017.

The Met held an exhibition named after the plundered item — “Nedjemankh and His Gilded Coffin” — before it was returned to Egypt in 2019 after an investigation revealed it was stolen during the uprising that ousted Egyptian ruler Hosni Mubarak in 2011.