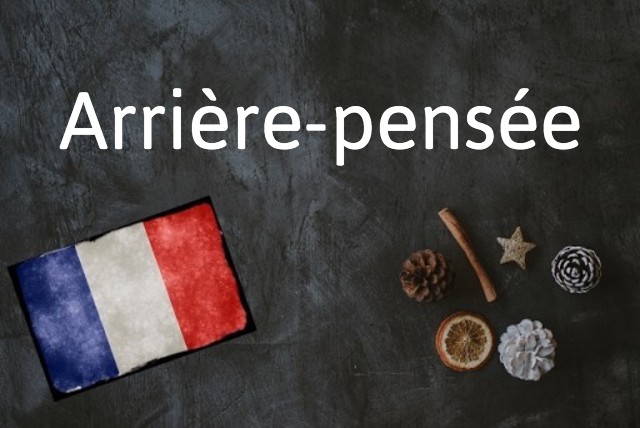 Why do I need to know arrière-pensée?

Because it's one of those expressions that you'll be keen to directly translate from English, but it won't make sense if you do.

Arrière-pensée literally translates to 'behind-thought', which is the French way of saying that someone has an 'ulterior motive' or a 'hidden agenda'.
You can't say agenda caché (hidden agenda) or mobile ultérieure (ulterior motive) in French. It doesn't sound too bad, but a French person would not understand what you meant (they would perhaps even think you'd taken their journal and hidden it from them).
When you think about it, arrière-pensée is a pretty good way of phrasing it, as the real thought literally is hidden behind the expressed thought. It's not spoken, it's just a suspicion.
The underlying thought is not necessarily bad – it can also be something nice too – but more often than not the expression is used in the pejorative sense.
Use it like this
Tu es vraiment belle aujourd'hui, et je te le dis sans arrière-pensée. – You're really pretty today, and I'm saying that with no ulterior motive.
Pour ma part, j'entrerai dans cette discussion sans arrière-pensée. – As for me, I'll enter this discussion without a hidden agenda.
Il faut arrêter de penser que tout le monde a une arrière-pensée. – You have to stop thinking that everyone has a hidden agenda.
Synonyms
Sous-entendu is perhaps the closest synonym, but it translates to 'undertone' and means that something is 'implied' rather than hidden.
Another way of saying arrière-pensée is avoir une idée derrière la tête – having a thought behind the head.