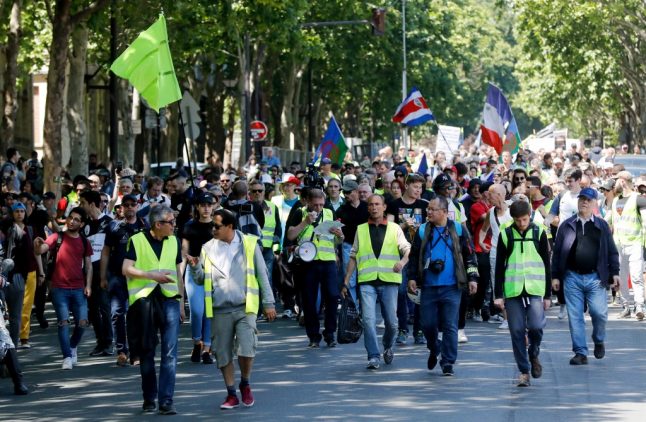 The officer was among riot police deployed at a demonstration in Strasbourg, eastern France, in January 2019, at the height of the yellow vest protests which often spiralled into vandalism and clashes with security forces.

An internal police report seen by AFP found that the 47-year-old officer “was not threatened directly or personally by any demonstrator or the victim.”

The woman was struck with a baton twice, resulting in wounds that required 12 stitches on the back of her head, and video also showed the officer kicking her as she lay on the ground.

During the trial the officer acknowledged his actions were “unauthorised” but said he remembered only striking her once.

He will not be allowed to carry any weapon for five years, and the conviction will likely lead to his dismissal, according to the victim's lawyer.

Also on Tuesday, four riot police were brought before a judge after being questioned over alleged violence against protesters in a fast food restaurant during a yellow vest demo near the Arc de Triomphe in Paris, a judicial source told AFP.

Several journalists were in the restaurant as well, and filmed some officers striking people even as they lay immobile on the ground.

France's police watchdog said this month that it had received almost 1,500 complaints against officers last year, of which roughly half were for alleged violence against civilians.

According to an official count, about 2,500 demonstrators and 1,800 law enforcement agents were injured in yellow vest protests.

But critics accused police of excessive force in several cases, including the use of rubber bullets that caused around two-dozen people to lose an eye, and explosive stun grenades to disperse protesters.

Only a handful of officers have faced trial over the claims.