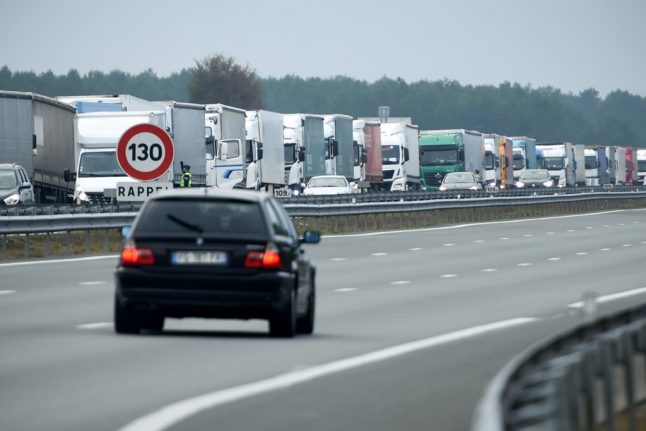 As he presented the first conclusions of France's Citizens' Convention on the Climate (CCC) on Monday, Macron said that he believed an ecological transition should not be at the expense of rural and isolated areas of France and who depended on their cars to get around.

“Those who spend 45 minutes or an hour every day on the highway to go to work (..) will say to themselves, 'there is no place for me in their project, it's an urban project where I do not exist',” the president told the 150 CCC representatives present.

“That is why I believe that the debate on 110 km/h must be postponed,” he said.

The CCC is a group of members of the public who have spent nine months putting together a far-reaching plan to lower France's carbon emissions by 40 percent by 2030.

The proposal to lower the limit on French motorways from 130km/h to 110km/h is one of the CCC's 149 proposals.

Macron said the government would retain 146 of the 149 proposals, which span over a wide range of topics from transport to the workplace and shopping and eating habits.

His announcements came the day after a Green surge dominated France's local elections – the French greens won in a series of important cities and the president's party did poorly – putting increased pressure on Macron to show that he would deliver on his promises to pave the way for a greener future for France.

None of the other proposals caused as much stir as the speed limit reduction, which has been a touchy subject in France for years.

When the French government in July 2018 lowered the speed limit on secondary routes – which largely run through rural areas – from 90km/h to 80km/h in a move aimed at cutting road casualties the move sparked a storm of protest.

It became one of the early rallying cries of the'yellow vest' protesters, who saw it as an extra tax that would disproportionately affect countryside dwellers.

Speed cameras on secondary roads were regularly attacked and burned out and at one point the government estimated that 80 percent of the country's speed cameras were inoperable.

After a year of protests, the government decided that it would give local authorities the power to reverse the change if they wanted to, so ow some areas have the limit at 80km/h and others have it at 90km/h.

OPINION: No, this doesn't mean France will get a Green president

Now, the Citizens' Convention on the Climate – paradoxically also itself a result of the 'yellow vest' protests, as Macron created it in response to the protesters' demands for more direct democracy – had asked to decrease the speed limit as an environmentally oriented measure rather than a safety measure.