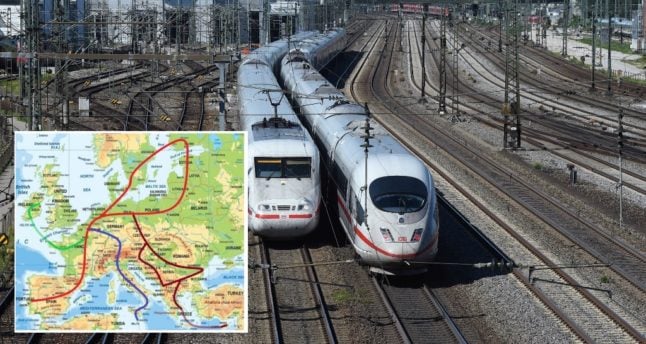 The EU's €2 trillion recovery package for economies blighted by the coronavirus pandemic and the subsequent lockdown has been driven by French president Emmanuel Macron and German chancellor Angela Merkel, and aims to avoid a damaging and long-lasting recession.

It proposes helping out industries particularly badly hit by the lockdown such as tourism.

But a report from the Vienna Institute for Economic Studies looking at ways of spending the fund to give the greatest benefit also suggests a series of massive infrastructure projects including a European ultra-rapid train network. The document proposes “a European green high-speed train network to be established as part of a recovery programme from the Covid-19 crisis over the period of the 2020s.

“The URT network should be a new double-track high-speed railway system that is complementary to the existing networks.

'However, where suitable, also existing lines could be adapted. An average speed in the range of 250-350 km/h should be achieved. This would allow passengers to halve the current rail travel times, for instance, from Paris to Berlin in about four hours, making air travel for a large part of the intra-European passenger transport obsolete.

“Cutting by around half the EU’s domestic air passenger operations has the potential to reduce global commercial aviation CO2 emissions by about 4-5 percent. In addition, rail cargo capacities would be increased, freight transport speeded up and so also road-vehicle emissions reduced.”

1. Paris to Dublin – from Paris to Brest, taking the Brest-Cork ferry then running from Cork to Dublin. The report describes this route as 'taking on an additional significance in the context of Brexit'.

2. Lisbon to Helsinki – running from Lisbon through Spain and France, via Paris, then to Belgium and the Netherlands before splitting into a loop via Berlin and onwards to Helsinki.

3. Brussels to Valetta – through Belgium, Germany, Switzerland and Italy before taking the ferry to Malta

4. Berlin to Nicosia – with a ferry-based sea link between Piraeus and Paphos and a loop between Vienna and Sofia.

The plan would give France an extra 2,060km of high-speed railway and Germany an extra 2,299km.