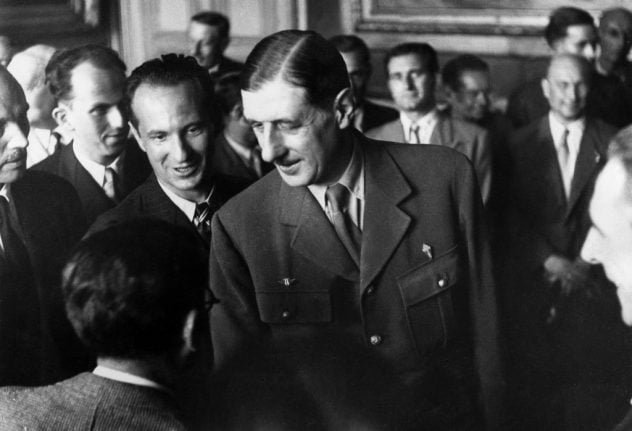 Undoubtedly France’s best-known president, de Gaulle is a name that still crops up in the political discourse.

The anniversary of his death is marked with ceremonies and wreath-laying in Colombey-les-deux-Eglises, the small village in eastern France where he is buried, and politicians including Prime Minister Jean Castex and many of the hopefuls for the 2022 presidential elections will be there.

His name is frequently evoked in political debate too, although there seems to be no limits on who can ‘claim’ his political legacy, like the Bible his message can be interpreted how you want it.

The actual heirs of his party politics, however, are the centre-right Les Républicains, currently wrangling over their choice of candidate for next year’s presidential bid.

Born in Lille in 1890, the young Charles learnt German at school and spent summer holidays in Germany, further cementing his fluency.

His linguistic abilities came in handy later on in life when as a WWI soldier he was wounded and captured by the German army, who held him as a prisoner of war until 1918.

During his imprisonment, de Gaulle was able to inform his fellow POWs of events during the war as he read and translated the German newspapers to them.

French people’s love for General de Gaulle didn’t save the statesman from a whole host of funny monikers, mainly relating to his 1.95m height.

There was “The Great Asparagus” (La Grande Asperge), Double Metre and from his detractors “Fool in the Heights” (Sot en Hauteur, a play on words on saut en hauteur, the high jump in French). He loved the Irish

De Gaulle was proud of the literary works of his grandmother, Julien Josephine Marie, who he was partly named after (his full name was Charles André Joseph Marie de Gaulle).

Her biography of 19th century Irish nationalist Daniel O’Connell titled “The Liberator of Ireland” inspired de Gaulle throughout his life, especially regarding the Irishman’s resistance to religious and political persecution.

When de Gaulle resigned as president after losing a referendum in 1969, he packed his bags and decided to spend six weeks in Ireland, where he insisted on visiting the grave of his hero O’Connell. De Gaulle’s uncle also wrote a book about the Celts in which he called for a union of Bretons, Scots, Irish, and Welsh people given their shared heritage, another family literary work which is thought to have further consolidated his admiration for the Irish spirit.

As if all this weren’t enough, the French statesman was descended on his mother’s side from an Irish military captain who fought the French army.

It’s fair to say that if he hadn’t been French, de Gaulle wouldn’t have minded being Irish.

De Gaulle’s iconic 1940 BBC radio address in which he called for the French to liberate their country from Nazi occupation almost cost him his life.

A French military court sentenced de Gaulle to death in absentia for drumming up support for Free French Forces and for openly opposing Pétain’s Vichy government.

There’s a lot of evidence to suggest that the French statesman’s relationship with his American counterparts was pretty frosty.

US President Franklin D. Roosevelt (pictured below next to de Gaulle) reportedly found him to be arrogant and cut him out of negotiations during the 1945 Yalta Conference to decide the fate of Germany and Europe post-WWII. De Gaulle also opposed the UK joining the European Economic Community as he was worried about Britain’s strong ties to the US, and he even pulled France out of NATO in 1966 following a disagreement with the US over their conduct in the Vietnam War.

The US’s hostility towards the French leader seems to have been reciprocal.

“To many Americans de Gaulle seems to embody all that is most objectionable and reactionary in Europe,” wrote the author of a 1965 New York Times op-ed.

So did de Gaulle hate the US? Well, above all he was a staunch nationalist who felt the US didn’t have his country’s best interests at heart, but he didn’t seem to consider them an enemy.

To quote de Gaulle in a 1965 interview: “In truth, who has been America’s staunchest ally, if not France…? Should the worst happen, should the freedom of the world come under threat, who would be the most obvious allies, if not France and the United States?”