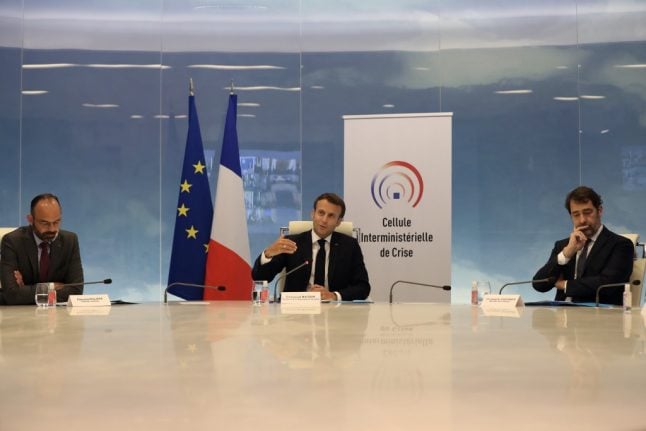 Those socially distanced cabinet meetings will have a lot to get through this year. Photo: AFP

Since March the French parliament has been sitting only in a limited form – with only a few dozen MPs in the chamber and most voting being done remotely or by proxy – and the vast majority of parliamentary time has been devoted to health and lockdown measures.

But as France continues its gradual reopening a revised schedule has been put forward and several matters that were postponed during the crisis are now back on the table.

Here's a look at the major items on the government's to-do list.

Remember that? The thing that caused France's longest running strikes since 1968 back in December and January? On January 15th, Prime Minister Edouard Philippe was saying that there was “no question of slowing down or delaying” the reforms, which just goes to show that you should never make predictions.

The bill to dramatically overhaul the pension system has already been through the Assemblée nationale, but its reading in the Senate was postponed by the crisis. Unless the senators adopt all the articles without modification – which seems unlikely given how controversial it was – the bill will then have to come back to the lower house for a further reading.

In its last reading the government adopted a controversial measure known as Section 49.3 to force the bill through. There is currently no timetable for this bill to be debated again.

“Do we still need to reform pensions? Yes. […] Should it be pursued now, it will be up to the President and the Prime Minister to decide, […] but the problem remains on the table,” Economy Minister Bruno Le Maire told France Info on June 11th.

The Senate has its own elections in September and usually discusses finance bills in the autumn so there is some speculation that this bill might not even be presented before the end of the year. The overhaul of the French benefits system comes in two parts and the first part – which tightened up access to the system and introduced a longer qualifying period – came into force last year.

The second part was due to come into force in March, but has now been postponed until September. One of its more controversial aspect was the change to the rules in how seasonal workers can claim benefits in the 'off' season, which lead to strikes in French ski resorts.

There are now consultations on this and the government will make a decision “by the summer”.

A bill that, among other things, extends IVF treatment to single women and lesbian couples will come back before the Assemblée nationale on July 6th for its second reading, having already gone through the Senate.

Despite polls showing that a majority of French people support the move, the bill was marked by protests from religious and socially conservative groups.

“The law of bioethics carries many societal advances, it is a text which is awaited by our fellow-citizens”, said junior health minister Adrien Taquet when announcing its debate date. People demonstrating in favour of extending IVF treatments. Photo: AFP
4. Local elections
These don't directly involve the government – apart from Prime Minister Edouard Philippe who is standing in the mayoral election in Le Harve – but are traditionally seen as a mid-term indicator of how the major parties are doing.
The first round of voting went ahead on March 15th – something which Emmanuel Macron received a good deal of criticism for – but the second round was postponed and will now be held on June 28th.
5. The economy
This is going to be the major challenge for this government – and most other governments around the world – for the rest of the year and into 2021.
All countries are likely to be very hard hit by the months when their economies were at a virtual standstill. The Bank of France predicts an 11 percent GDP contraction this year – the worst recession since World War II.
Unemployment will likely pass 11.5 percent in mid-2021, the central bank said, adding that the economy will only recover to pre-crisis levels by mid-2022.
President Emmanuel Macron will be making another live TV address to the nation in July, which is likely to focus heavily on his plans to drag the country back from the financial brink.
READ ALSO ANALYSIS Can Macron reawaken the sleeping French economy after lockdown?
6. Coronavirus
On top of that, of course, the government will be keeping a very close eye on the virus situation in the country, especially in the autumn when some experts are predicting a 'second wave' will happen.
A bill is also coming before parliament from June 17th to give authorities extra powers to put in place local health restrictions if further outbreaks occur. This would replace the State of Health Emergency which gives wide-ranging powers to introduce harsh restrictions such as a lockdown and which expires on July 10th.
The head of the government's Scientific Council says France will not return to a nationwide lockdown even if there is a second wave, but local lockdown restrictions could come back if there are severe outbreaks.
READ ALSO Coronavirus in France: Is the worst behind us?

All in all, it would be fair to say that there is a challenging year ahead.