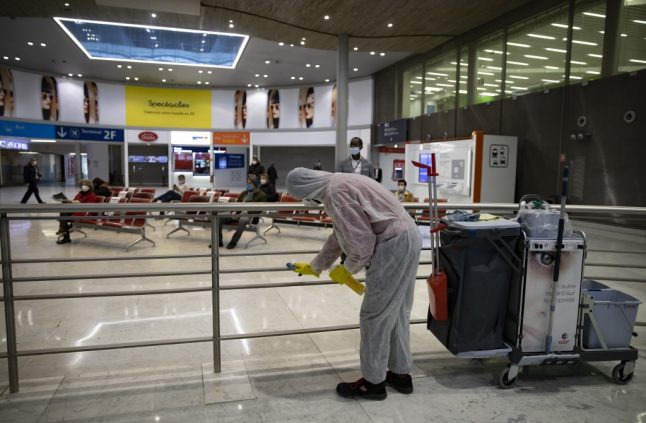 Strict hygiene rules seem, for the moment, to be keeping Covid-19 numbers under control in France. Photo: AFP

When France first began listing its strict nationwide lockdown on May 11th, all eyes were nervously focused on the latest coronavirus data as we waited to see if lifting restrictions would provoke a spike in cases.

One month on and not only does there not seem to have been a spike, but phase 3 of lifting restrictions has been accelerated, with the whole country now designated a green zone and schools to reopen fully from June 22nd.

So what does the latest data from public health agency Santé Publique France tell us about the progress of the virus?

Number of Covid-19 deaths recorded in the 24 hours to June 16th.

Number of Covid-19 deaths recorded on June 14th. This was the first time that hospital deaths in France had hit single figures since March, but this was a Sunday and numbers tend to dip over the weekend, probably due to reporting issues.

New cases confirmed in the 24 hours to June 16th.

Deaths in care homes last week. After problems with accurate daily data on care home deaths that lead to some days a negative death rate being recorded to correct earlier reporting, deaths in care home are now reported weekly. In the week leading up to June 9th, 34 Covid-19 deaths were recorded.

Coronavirus clusters. As France has, somewhat belatedly, rolled out a fuller testing programme it is able to identify early new outbreaks of the virus. A cluster is defined as three confirmed or probable cases within a period of seven days occurring in the same community or in people who had participated in the same event or gathering. Health chiefs say the test and trace programme will be crucial in avoiding more widespread outbreaks.

Full mortality figures are now available from French stats agency INSEE up to the end of May. https://t.co/thC53RvtfY
They show NO Covid increase in the death rate for the whole of May (GRAPH: yellow 2020, red 2019, blue 2018). This followed a sharp spike 11 March-30 April. 1/6 pic.twitter.com/MwfbNYuev6

Excess deaths from all causes in France in March and April compared to the same period in 2019. As countries have wildly different recording methods for coronavirus deaths, many experts are now looking at excess deaths as a more reliable indicator as they show how many more people died in 2020 compared to previous years.

In May, there were three percent fewer deaths in France from all causes than the previous year. It is suggested that the reason for this is that Covid-19 deaths had fallen off sharply by that point, while the lockdown meant that there were fewer deaths from other causes such as road accidents and accidents at work.

French regions saw excess deaths of more than 50 percent during the epidemic. The two worst affected regions were the greater Paris Île-de-France region which recorded 11,400 more deaths than usual (up 80 percent) and Grand Est, where the epidemic began, which recorded 4,760 (up 56 percent).

No other regions recorded more than a 50 percent rise and some saw very small increases or none at all, suggesting that the strict nationwide lockdown did manage to contain the spread of the virus.

Here’s France, where Paris suffered badly, and Grand Est region also faced a big outbreak, but although most other areas were affected none saw all-cause deaths increase by 50% or more.

In other words, worst of French outbreak was contained in much fewer areas than UK outbreak. pic.twitter.com/SV9rmzixMQ