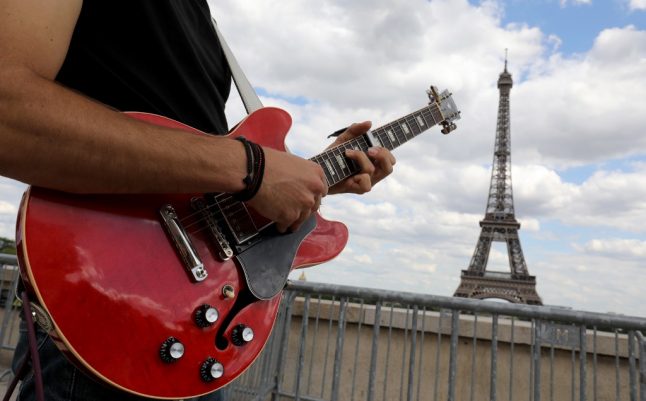 To celebrate the beginning of summer, French cities turn into musical street parties every year on June 21st.

This year, the prospects of maintaining the Fête de la Musique looked bleak as France recently had begun to lift a two-month long strict lockdown to curb the spread of the coronavirus in the country.

But after weeks of steady decline in key indicators of the spread of the virus, life has returned to more normal and the music festival will go ahead.

In towns and cities across France, Sunday will be a day where artists set up booths in bars and restaurants and on street corners to perform for passersby.

READ ALSO: What you need to know about France's biggest street music party For Paris – a city that due to its relatively high levels of coronavirus had been unable to fully reopen its bars and restaurants alongside the rest of the country – President Emmanuel Macron came bringing good news on Sunday evening as he announced that, as of June 15th, bars and cafés could reopen fully.

Cities will need to follow health precautions, however, with bars and restaurants maintaining social distancing rules by spreading out their tables and limiting the number of customers.

Culture Minister Franck Riester called on people to celebrate the festival “without mixing in too big groups.”

“We try to offer something that has a nerve, which allows the French to sing, to play music, without taking risks,” Riester told French news channel RTL.

The patients are in the greater Paris region of Île-de-France (3 cases), Auvergne-Rhône-Alpes and Occitanie. The authorities said the cases were reported among men who have sex with men, confirming a Europe-wide trend.

More than 170 monkeypox cases have now been confirmed outside Africa, where the disease is endemic, in a dozen European countries (Spain, Belgium, Italy, the Netherlands) but also in Australia, Canada and the USA.

The French HAS has recommended a vaccination strategy that would include giving vaccines to contact cases for monkeypox patients who are at high risk – including healthcare workers.

Existing vaccines such as the third-generation smallpox vaccine are effective against monkeypox.

The HAS recommendations are advisory and the decision lies with the French government. Health minister Brigitte Bourguignon indicated to RTL that they would be following the HAS advice, and that stocks of vaccine were already available in France.

She added that this would be a targeted vaccination for contact cases, not a pass vaccine rollout as seen during the Covid pandemic.

Monkeypox is a rare disease, similar to smallpox, but less dangerous. It can be transmitted from animals to humans or directly between humans who are in close contact. The symptoms are less severe than smallpox, and include fever, headache, muscle pain, back pain.

Later, rashes, lesions, pustules and finally scabs can appear. There is no treatment for monkeypox which usually heals spontaneously with symptoms lasting 14 to 21 days.

The risk of contagion is very low according to the European Center for Disease Prevention and Control (ECDC), but rises in people with multiple sexual partners.