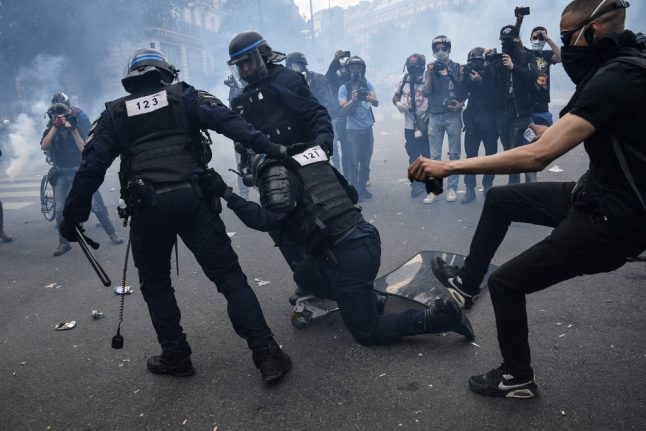 Riot police in Paris's Place de La Republique drag one of their officers away as a protester attempts to kick him. Photos: AFP

Officers prevented protesters trying to launch a march through the streets of the capital, at the end of a three-hour rally. They fired tear gas after some demonstrators pelted them with projectiles.

This was the latest in a series of French demonstrations following the death last month of black American George Floyd at the hands of police officers in the United States.

But the protesters were also highlighting what critics say is the problem of racism and violence in the French police. Several thousand people congregated at the Place de la Republique in Paris (seen above), answering a call from a pressure group seeking justice in the case of Adama Traore, a young black man who died in police custody in 2016. Traore's sister Assa Traore (pictured above) called on those attending the rally to “denounce the denial of justice, denounce social, racial, police violence”, renewing a call for an investigation into her brother's death.

“The death of George Floyd — this African-American killed on May 25 in Minneapolis by a white policeman — is a direct echo of my brother's death. It's the same thing in France, our brothers are dying,” she said. “I came to demonstrate for justice (and) we have been gassed several times then they surrounded us and things got out of hand given we couldn’t leave,” he said. Another demonstrator, 27-year-old student Elisa, said she did not routinely favour an “anti-cop discourse” but added it was “clear there is a problem of racism and fear of the police today”.

In the southeast city of Lyon, police used water cannons and tear gas at the end of a demonstration attended by about 2,000 people. In the Mediterranean city of Marseille, police said 2,200 people demonstrated. Organisers of the rally put the figure at between 4,000-5,000.

Other rallies took place in cities from Montpellier in the south to Nantes and Bordeaux in the west. The rallies came at the end of week when France's police watchdog said it had received almost 1,500 complaints against officers last year — half of them for alleged violence.

French President Emmanuel Macron on Thursday noted the need not to “lose the youth”, as feelings run ever higher in the wake of the Floyd killing.

On Wednesday he described racism as “an illness which touches all society”.

Interior Minister Christophe Castaner has promised “zero tolerance” of racism in law enforcement, saying it is clear some officers “have failed in their Republican duty”.

He cited several instances of racist and discriminatory remarks that have recently come to light.

Amnesty International meanwhile appealed for “a systemic reform of police practices” in France. “The seriousness of the situation requires a global response from the authorities,” the group said in a statement. Government spokesman Sibeth Ndiaye suggested in an interview with Saturday's Le Monde that there should be “constructive debate” regarding race, with efforts redoubled against racial discriminations”.

Saturday's demonstrations followed two days of protests by police officers themselves, angry at the accusations being laid against them, and what they say is a lack of government support.

Frederic Lagache of the police union Alliance said he hoped Macron would receive a delegation, as many officers felt their “honour had been injured” over the widespread criticism of the force.