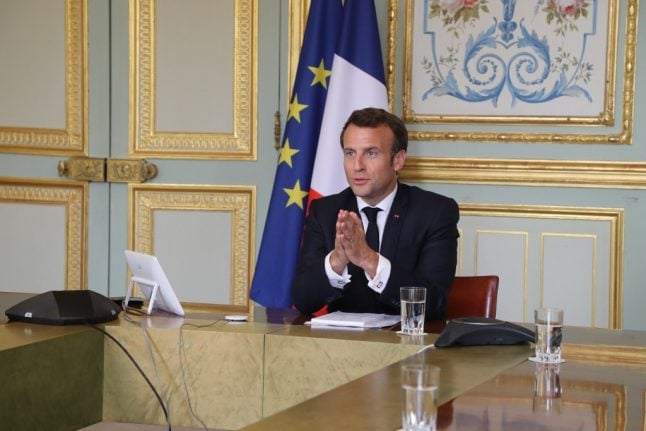 “The fight against the epidemic is not finished but I am happy about this first victory against the virus,” Macron said, before declaring that, starting Monday, “all of France will turn green.”

That meant that the greater Paris region Île-de-France would go from orange to green on the government's coronavirus map earlier than expected, and that all bars and restaurants would be able to fully reopen again.

France's overseas territories Mayotte and French Guyana would be exempt and stay orange for the time being.

Phase 3 was set to begin on June 22nd, but as expected the president announced a further loosening up of restrictions that would enter into effect earlier than planned.

“Tomorrow, we’ll be able to turn the page on the first act of this epidemic,” he said.

“We will be able to find the real France again.”

After announcing the good news, he cautioned that “this does not mean that the virus has disappeared.”

“We will have to live with the virus for a long time yet,” he said.

As of Monday, all bars and restaurants can reopen again, including in Paris where only terraces have been able to get back in business.

All schools will reopen from June 22nd, and attending school will be mandatory for all pupils in crèches, écoles (elementary and primary school) and collèges (secondary school).

Macron announced that, as of Monday, all travel into European countries would again be allowed. That means everyone will be able to move freely inside Europe without having to show a valid international travel certificate.

Travel outside of the EU will be made possible again from July 1st.

France will hold the second round of its local elections on June 28th.

All of the country's nursing homes for elderly will open to visits again from Monday.
The measure will be met with great relief by both residents, family and staff, after a series of media reports showing how elderly in Ehpads have suffered from loneliness during the lockdown.
READ ALSO: How coronavirus torn through France's elderly nursing homes

Pointing to the government's economic help measures during the lockdown, Macron said they were proof of its “total mobilisation” and dedication in supporting the country's businesses, “whatever it cost.”

“Everything has been done by the government to save our jobs and to help everyone.”

READ ALSO: Coronavirus in France: Is the worst behind us?

Now, the president said, France was entering a new chapter where it needed to rebuild its economy.

“Our first priority is to reconstruct an economy that is strong, green and just,” Macron said, promising a “relaunch” of the economy founded on “solidarity.”

“We have decided on a massive plan for the hardest hit: the automobile industry, aeronautics, tourism, culture, catering, hotels ”, Macron said.

“In total, we have mobilised nearly €500 billion for our economy, for workers, for entrepreneurs, but also for the most precarious.”

The president's address to the nation came at a tense moment, as thousands of people in French cities had taken to the streets in the latest protest against police violence and alleged racism on Saturday, in an echo of the Black Lives Matter movement in the United States.

As expected, Macron tried to strike a balance between showing sympathy for the protesters' demands and denouncing racism, while avoiding stirring further ire among the police – who have already held their own demonstrations.

“Our police (..) deserve to be recognised by the nation,” he said, pointing to the “dangers” that police officers faced daily.

Referring to international calls for tearing down statutes of colonial personalities, he said:

“The Republic will not delete any name, any trace of its history.”

Macron will speak to the French again in July.

“We have before us historic challenges,” he said.

“Let's never forget our strengths, our history, our youth, our sense of work and commitment, our desire for justice, our capacity to create to live and change the world, our benevolence.”