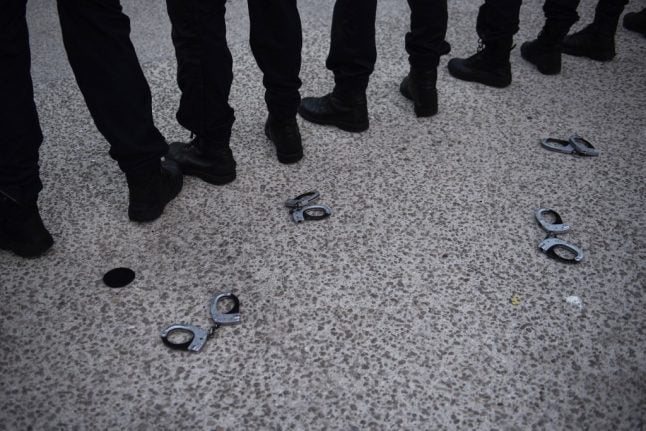 After a string of protests against police brutality and alleged racism in France, it was the police themselves who took to the streets in several French cities on Thursday.

In Nice, Lyon and Toulouse among others, officers threw their handcuffs on the ground to protest Interior Minister Christophe Castaner's promises earlier that week of a “zero tolerance” for racism among the country's law enforcement.

READ ALSO OPINION Are French police racist? Yes, some of them

Vowing to strike down hard on any racist behaviour, Castaner said any police officer even suspected of misconduct would be immediately suspended. He also declared to scrap a controversial detainment technique known as the “chokehold”.

The announcements caused outrage among France's police forces, with unions claiming the government would reduce policing to “street fighting or the use of tasers”.

“My colleagues are no longer protected, they are left in the desert by their minister,” said Yves Lefebvre of Unité SGP police union, adding,

“So I call on my colleagues not to make arrests anymore, to stop intervening.”

Philippe Capon from UNSA police union said: “We told (the interior minister) that his points from Monday were misplaced.”

The “chokehold technique,” Capon said, “permits us to intervene on a daily basis.”

On Friday morning, police officers in Paris marched down the Champs-Elysées avenue in protest.

Police protesting in Paris today in a bid to make the French interior minister backpedal on his promises earlier this week to scrap a controversial detainment technique known as 'chokehold' and immediately suspend any officer accused of misconduct. https://t.co/MQt7YalF4m In a bid to calm the police protests, Castaner met with police unions on Thursday and further talks were scheduled for Friday.
Police unions have told French media that the interior minister expressed “regret” over his speech and seemed willing to backpedal on some of the points.

New protests against police violence and racism are expected in French cities this weekend.

President Emmanuel Macron will be making his fourth televised speech to the nation since the beginning of the coronavirus epidemic on Sunday, with the protests likely featuring among the topics he will address.

READ ALSO: What can we expect from Macron's speech?