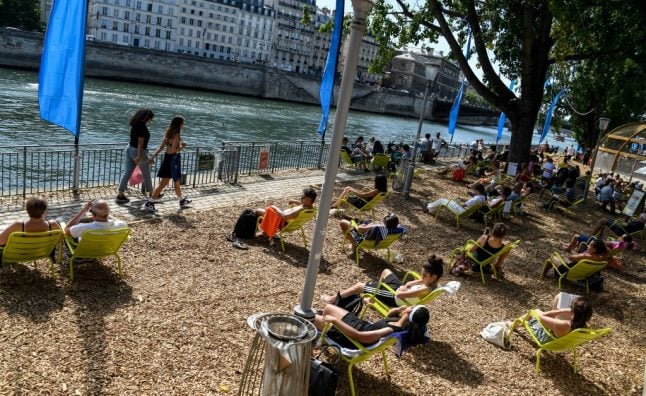 The urban beaches are back, with extra health measures. Photo: AFP

Due to health fears over Covid-19 and social distancing rules there had been some doubt whether the beaches on the banks of the Seine and beside the Bassin de la Villette would go ahead this year.

But Paris mayor Anne Hidalgo decided to go ahead, saying: “Many Parisians will not got on holiday this year. The swimming pools at the Bassin de la Villette are back. Photo: AFP

“Many visitors might come to Paris, especially visitors from other French regions rather than abroad, and we really want to welcome them, and keep this festive spirit up in Paris.”

The beaches are now open and will stay open until August 30th.

However, there are some differences and plenty of health precautions in place.

The canal basin of the Bassin de la Villette in the 19th arrondissement once again sees the addition of three swimming pools, while the canalside area has beach areas with deck chairs, changing facilities and food and drink stalls.

New this year is a 'float-in' cinema – an open-air cinema screen that people can view from the electric or paddle boats that are available on the canal basin (or watch the movie from the canal banks).

It will be open every day from 1pm to 8pm. Hidalgo said: “On the Bassin de la Villette, I wanted to give a positive answer to all restaurateurs who asked us to return.”

On the Seine riverbanks the beaches are returning, but the usual schedule of entertainments has been scaled back. The beach opened at the weekend with a concern performed from boats on the river.

Both sites will be used for the pop-up Covid-19 testing centres that are gradually being expanded around the capital over the summer.

The testing centres are situated at the villages santés (health villages) at the Bassin de la Villette and between the Pont de Sully and the Pont Neuf. They are open from 2pm to 6pm and the tests are free.