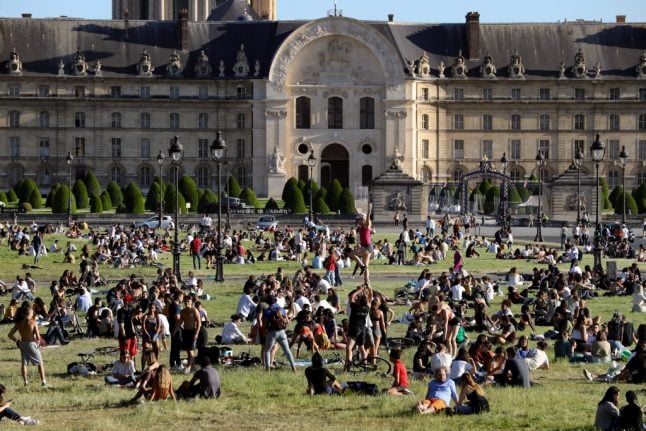 Before France began to lift its strict, nationwide lockdown in May, epidemiologists predicted that a second epidemic wave would, were it to occur,  begin to show before the end of that same month.

Halfway through June – after five weeks of anxious national monitoring of the Covid-19 infection and death rates – there has not yet been a spike in the number of new cases in France.

IN NUMBERS: What is the coronavirus situation in France now?

Across France many restrictions have been lifted, an international travel within Europe is now allowed again, although people are still advised to practice social distancing and hygiene measures.

This has prompted the question: Is it safe to come out (fully) now?

“Today, the virus is under control in France and its neighbouring countries,” said Antoine Flahault, professor of public health and Director of the Institute of Global Health at the University of Geneva, which follows the coronavirus development in the world.

“What I cannot say, unfortunately, is that it's game over,” he said.

While the virus seems to have taken a “natural summer break,” it is by no means completely gone.

Daniel Camus, a professor at the Pasteur Institute in Lille which researches the coronavirus in France, said the virus could only be contained if people maintained protective measures such as masks, hygienic practices and social distancing.

“If people stop taking health precautions we could see a resurgence of the virus,” he told The Local. Masks have been a key health measure for the lifting of lockdown in France. Photo: AFP

Currently, Camus said, there was a big gap between people's perception of risk and the actual level of risk.

“People feel like there’s no danger anymore,” the epidemiologist said, pointing to that France was reporting a continuing decrease of hospital and intensive care admissions and a declining death rate, at the same time as the government was loosening up society again.

A better way to inform people, Camus said, would be to stop focusing on the number of new hospitalisations and deaths – “these numbers seem very distant for people” – and rather focus on the risk for each person of getting the virus.

“If you knew that for every person you meet, there's an X chance that they might carry the coronavirus and be contagious, you would probably think twice before hosting a big party” he said. “To achieve herd immunity, at least 50 percent of the population in a country needs to have had the virus,” said John-Arne Røttingen, who leads the World Health Organisation's quest for a coronavirus treatment, in an interview with The Local.

French health authorities have said France's immunity level is likely at between 10 and 15 percent, but much lower in areas that escaped the worst of the first pandemic wave.

“We must remain extremely vigilant,” said Jean-François Delfraissy, president of the Scientific Council that advises the French government on coronavirus-related measures.

READ ALSO: No return to lockdown in France, even if there is a second wave, says head of Scientific Council

One of the reasons the coronavirus contagion got out of control in March was that the French government did not have the capacity to aggressively and extensively test the population, contrary to countries like its neighbour Germany where the government managed to curb the levels of contagion early enough to avoid a full lockdown.

“Countries that tested extensively and early prevented the pandemic from exploding and decreased death tolls dramatically,” Flahault said, pointing to Germany as “one such marvellous example.”

Testing has become the cornerstone of France’s strategy to successively ease the lockdown without provoking a backlash in the number of cases. The government has instructed local authorities to rigorously test inhabitants to nip new cases of contagion in the bud.

So far, authorities have identified 150 clusters across the country. Like many other countries, France has also rolled out a coronavirus tracing app, intended to alert people to casual contact with a person who later tests positive, such as fellow Metro passengers or café customers.

President Emmanuel Macron in his speech to the nation on June 14th announced the lifting of more measures and declared that the whole of mainland France is now a 'green zone' of low virus transmission levels.

Across the country cafés and bars are now fully open along with gyms, swimming pools and tourist attractions and from June 22nd all children will return full-time to school.

READ ALSO: What can we expect from Macron's announcement?

Flahault said that countries could use the coronavirus “break” to return their societies to more normality.

“If we monitor the virus closely, if we mass-test the population, it could be the time to allow for more risky behaviour,” he said.

But, crucially, France and other countries needed to prepare for what could be yet to come, he said.
“We need to be prepared for a second wave in the autumn,” he said.