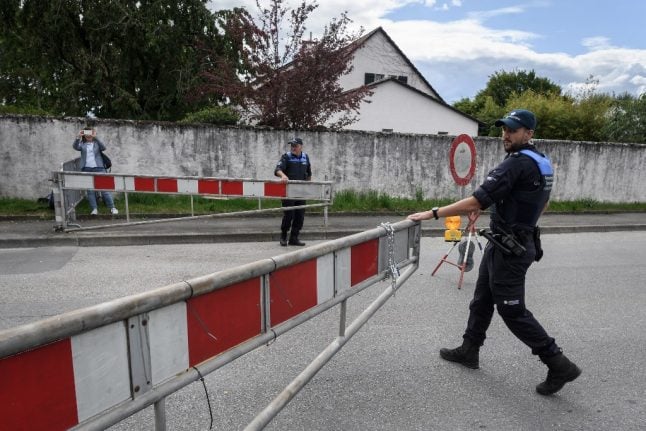 Guards reopen the French-Swiss border at Thonex near Ambilly All photos: AFP

Many countries within Europe had several weeks ago confirmed that they would reopen the borders on Monday, but France only gave the official go-ahead on Friday.

On Friday a joint statement from France's Interior Minister Christophe Castaner and foreign minister Jean-Yves Le Drian said: “In view of the favourable evolution of the health situation in France and Europe and in accordance with the recommendations of the European Commission, France will lift on the morning of June 15th (00h00) all restrictions on movement at its internal European borders (land, air and sea) put in place to combat the Covid-19 pandemic.”

On Thursday the European Commission published a recommendation that all EU and Schengen Zone countries should lift internal border controls (for travel from within the European bloc) from June 15th, although the final decision lies with individual countries.

From midnight on Monday, all travellers arriving from with the EU, UK and Schengen zones – regardless of their nationality – no longer need an international travel permit and do not need to prove that their travel is essential.
Unlike some European countries, France never completely closed its borders, but all types of travel had been heavily restricted since April.
People travelling from Europe were allowed in for essential reasons only, and have needed to present an international travel permit at the border.
Among those allowed in were French citizens, people who had their permanent homes in France (but not second home owners) cross-border workers, delivery drivers and vital medical personnel. With those restrictions lifted, the only restriction that now remains in place for some European travellers is a quarantine recommendation.
Most European countries have opted against this, but the UK and Spain have imposed 14-day quarantines on international arrivals, and France has announced that it will also quarantine arrivals from those countries “on the principle of reciprocity”.
However the French quarantine is voluntary and there will be no enforcement or fine handed out, people will be “invited” to observe a 14-day period of self-isolation.
Spain's quarantine will cease on July 1st while the UK, which only introduced its measures on June 8th, has said it will review them every three weeks.
READ ALSO Who will be quarantined on arrival in France?
For travellers from outside the EU, UK or the Schengen Zone, restrictions remain in place, at least for the moment.
The European Commission proposes a gradual reopening of external borders from July 1st, but only for certain selected countries with the health situation in the country being the main criteria.
The statement from Castaner and Le Drian added: “In accordance with the European Commission's recommendations and inspired by the French proposals, France will also gradually open its Schengen external borders from July 1st.
“This opening will be gradual and differentiated according to the health situation in the various third countries and in accordance with the arrangements that will have been agreed at European level by then.”
But there was some good news for international students, with the statement adding: “In view of the stakes involved in making universities attractive, international students will be allowed to come to France, regardless of their country of origin, and the arrangements for their reception will be facilitated. Their applications for visas and residence permits will be given priority.”
READ ALSO Will Americans be able to come to France in July?
Once you are in France, most of the strict lockdown rules, including the 100km travel limit, have now been relaxed but there are still some rules that you need to be aware of – find out the 11 lockdown rules that you still need to obey here.