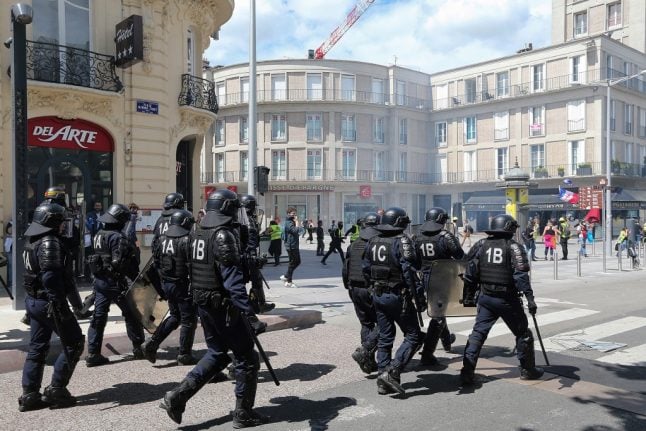 Forty percent of complaints against the police were over policing of protests. Photo: AFP

About half of the complaints were for alleged violence against civilians, according to a report of the IGPN watchdog, with President Emmanuel Macron urging government to “accelerate” steps to improve police ethics amid widespread public anger over alleged abuses.

The presidency said Macron met on Sunday with Prime Minister Edouard Philippe and Interior Minister Christophe Castaner, who was set to hold a press conference later on Monday, after some 23,000 people protested in several cities Saturday to demand “justice”.

Demonstrators rallied in particular around the 2016 death in custody of Adama Traore, a 24-year-old black man, in a case with echoes of the death of George Floyd, which has sparked mass protests against police racism in the United States. The IGPN said complaints rose by nearly a quarter last year, when police were deployed for months of weekly “yellow vest” anti-government protests.

According to an official count, about 2,500 demonstrators and 1,800 law enforcement agents were injured in yellow vest protests, which the IGPN said was at the origin of 310 of last year's complaints.

Violence and arson during the protests made world headlines, with rioters running amok in Paris and other cities, smashing shopfronts, torching cars and looting businesses.

But activists say two dozen people lost an eye as police used rubber bullets to rein in the rallies, and five lost a hand to stun grenades. In January, when police were dealing with a nationwide strike against pension reform, a riot officer was caught on camera punching a bloodied protester held down on his back.

Another video showed an officer tripping a woman, and yet another a policeman firing a rubber bullet at point-blank range.

In the wake of the Floyd protests, which have since spread worldwide, the French demonstrations were sparked by an expert report last month clearing the three arresting officers in Traore's case.

This was in spite of one of the officers having told investigators the young man had been pinned to the ground with their combined body weight, and a report commissioned by Traore's family finding he had died due to the police members' actions.

Some 20,000 people rallied in Paris last Tuesday to demand justice for Traore and Floyd, even though authorities had outlawed any mass gatherings, followed Saturday by more protests in several French cities.

Last week, the public mood was further inflamed when media outlets published the contents of a private Facebook group on which police members repeatedly used racist and sexist terms and mocked victims of police brutality.

Castaner promised that “every mistake, every excess, every word including racist expressions” by police would be investigated and punished.

Macron has instructed Justice Minister Nicole Belloubet to reopen the probe into Traore's death, and Castaner to step up measures to “improve the ethics” of the police force, the presidency said.

The IGPN report said nearly 40 percent of the cases reported last year arose from police action during protests, and 13 percent during identity checks.

Another 14 percent were for alleged violence committed against people in detention.

Also on Monday, France's human rights ombudsman Jacques Toubon raised the alarm over a “crisis of public confidence in the security forces” and urged a reversal of what he described as a “warring mentality” in law enforcement.