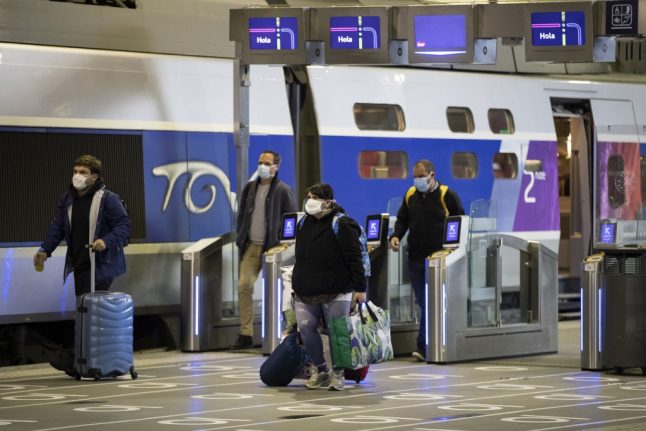 Anyone travelling by train in France has to wear a mask throughout the journey. Photo: AFP

The tickets will represent between 25 percent and 30 percent of all SNCF train tickets sold for the summer, according to the company.

“100,000 have already been sold,” said marketing director Jérôme Laffon to Le Parisien, in an interview where he laid out the rail operator's relaunch plan to get back on its feet after over two months of running on a skeleton service.

As France entered its second phase of easing its strict, nationwide lockdown imposed on March 17th to curb the spread of the coronavirus, people are allowed to move freely within France.

On June 2nd, the French government lifted the rule that limited non-essential travel within France to 100km from home.

Calendar: The key dates for travel to and from France this summer

Tourist spots like hotels and camp sites could also reopen in most parts of the country, making  the prospect of a weekend trip feasible for the first time since mid March.

SNCF, which took severe economic blows during the lockdown, is hoping that people will use the summer to go on staycations by train, seeing as international travel is still restricted.

The company has also made moves to increase flexibility when booking, making all exchanges or cancellations of train trips in July or August free of charge.

“Our intention is to get the French back in the trains as soon as possible,” Laffon told Le Parisien.

“That's why we are not using this period to increase our prices.”

Anyone with a discount card such as Liberté or Avantages that expired since the lockdown entered into effect will see it automatically extended until the end of August. Cleaning routines have been heavily ramped up to reduce the risk of spreading the coronavirus between passengers. Photo: AFP
Only half of the seats

The three million tickets that cost less than €49 are spread out over its high-speed TGV trains, its low-cost Ouigo trains and its regional Intercité trains.

Because of new health rules, SNCF can only sell tickets for half of the seats per train, to maintain social distancing during the journey.

Other health measures includes all passengers having to wear masks during the journey, and the carriage bar will remain closed at least until July.